Really great brakes are like an upgrade to your confidence on the track - more deceleration on tap means lower lap times thanks to being able to go deeper into corners, and less fade gives you the reassurance to do it corner after corner and lap after lap. But it’s not as simple as just slapping on a brake kit with the biggest rotors and largest calipers that will clear your wheels, and it’s even possible to have “too much” brake, making the car a chore to drive and slowing you down even when you’re not using them.

Today, we’re going to look at some useful information when it comes to putting together a brake kit for competition, and how to get the most out of the hardware you’ve selected. We’ll concentrate on circuit racing, including autocross, time attack, and open track days; while brakes for drag racing are also a complicated subject, they’re a different kind of animal thanks to the special demands of straight-line competition, and are beyond the scope of what we’re talking about here. 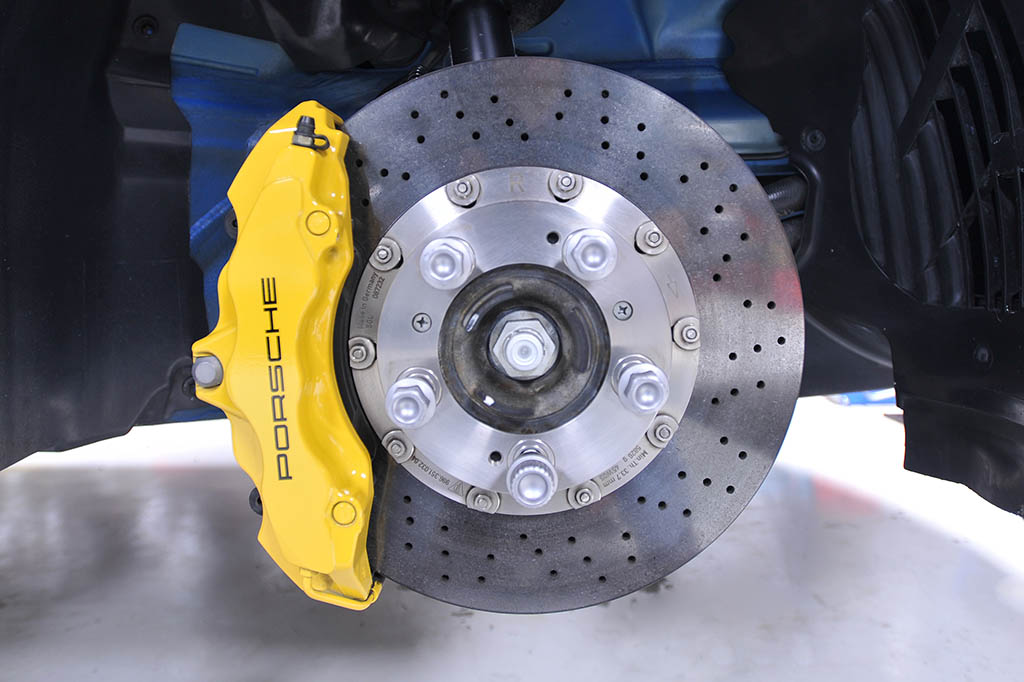 When it comes to how effective brakes will be, it all comes down to the interface between the rotor and the pad - everything else simply serves to support this relationship. At a microscopic level, a properly-bedded-in cast-iron rotor will actually have some pad material embedded in its surface, and pad compounds and rotor metallurgy both take this into account. Before using any new brake kit in practice or competition, you must make sure that the pads and rotors have gotten to know each other properly via the manufacturer’s recommended break-in process. This goes for spare pads as well; if you are competing in a form of racing where you’ll go through more than a single set of pads in a weekend (or a single race, for those running endurance events), you’ll need to make sure your spares are already broken in and ready for use.

…it’s even possible to have “too much” brake, making the car a chore to drive…

Speaking of pads, this is an area where a racer has a lot of opportunity to “tune” brake performance to their liking. One popular manufacturer of racing brake pads offers no less than  nine different compounds just for motorsports applications (and a similar number for high performance street use), with a range of different characteristics and performance trade-offs.

The first aspect of a pad compound to consider is torque - how much grip the pad can apply to the rotor, using the available pressure from the caliper. While this might sound like the start and end of the story, consider the fact that a broomstick jammed into the spokes of your bicycle will deliver more brake torque than you can effectively use.

Peak torque is an important factor for cars with a lot of grip from big, sticky race compound tires, a lot of downforce, or both. But in order to be useful, that torque has to be available in a controlled way, and pad compounds can be formulated to adjust how it is delivered. Cars with limited traction under braking can benefit from compounds designed with a linear torque delivery, to allow the driver to modulate braking short of lock-up (or ABS activation, in situations where that’s a factor.)

While this might sound like the start and end of the story, consider the fact that a broomstick jammed into the spokes of your bicycle will deliver more brake torque than you can effectively use.

You’ll also hear the term “bite” to describe initial braking force - cars with a lot of downforce and/or tire grip can take advantage of pads with a lot of it because the first moments of braking deliver the most deceleration, but quite often, drivers will describe brakes with high initial bite as “grabby” and there can be a steep learning curve before you become comfortable with the non-linear torque characteristics. “Release” is the flip side of bite, describing the brake feel as pressure comes off the pedal, and pads with good release characteristics are easier to modulate at the very edge of tire traction.

Heat tolerance and rotor wear are the two other major dimensions of compound selection. For situations like autocross or (to some extent) time attack where your brakes are going to start off cold and then be subjected to a large heat load, you’ll want a pad composition that is engineered to deliver consistent torque across a wide heat range, possibly at the expense of developing some fade if the heat input exceeds the ability of the system to shed it over a longer time period. For multi-lap track day use or wheel to wheel competition where it will be possible to get the pads and rotors up to a ‘working temperature’ and keep them there, a composition optimized to deal with heat that trades off poor cold torque is going to make more sense. 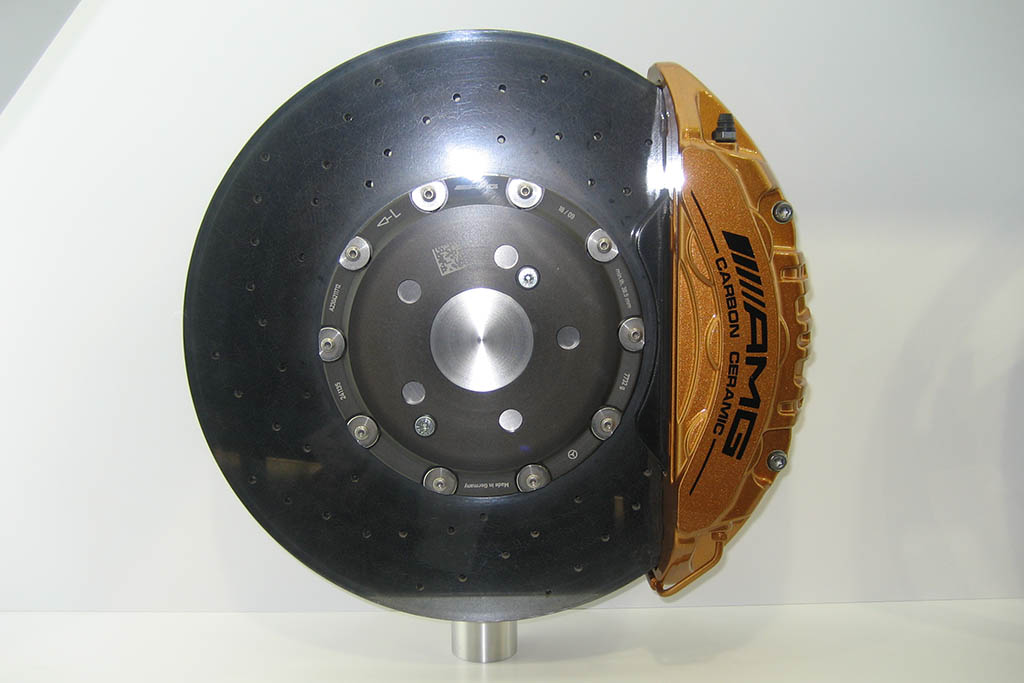 For high-end racing applications, carbon brake rotors and matching pads offer the widest range of heat tolerance without fading. In the past, these were competition-only parts due to their poor performance when cold, their lack of durability, and their sensitivity to pad/rotor contamination, but recent years have seen them make their way into many OEM applications in sports cars as well. These brake setups are far more reliable and capable than the track-only carbon brakes of the past, but they carry very steep initial costs and replacement of the consumable components is expensive as well. It’s not unheard of for some non-professional racers to ‘downgrade’ to metallic brake rotors and conventional pads to keep costs for a season of racing in check.

…a vented rotor will also be more rigid, ounce for ounce, than a solid one.

Since we mentioned consumable components, it’s definitely worth talking about rotors at this point. Once you begin to put laps on your car, you will quickly discover that it’s not just the friction material in the pads that wears out - brake rotors have a finite lifespan as well, and should be considered a component that requires scheduled replacement. There are numerous styles of rotors available, but the vast majority you’ll see that are suitable for competition are “vented” designs. These rotors have two friction faces separated by cast-in vanes that allow air to circulate from the hub center to the outside of the rotor, helped by centrifugal force.

There’s some debate about just how effective this circulation actually is - the amount of air being moved is small, and it’s likely that the biggest advantages of a vented rotor design over a solid disk are increased mass to act as a heat sink, and improved dimensional stability. In the same way that a box girder resists being deformed better than a flat plate made from the same amount of material, a vented rotor will also be more rigid, ounce for ounce, than a solid one.

You’ll also see a lot of debate about drilled and slotted rotors. In theory, both allow trapped gasses and debris to escape from the interface between the pad and the rotor, but in recent years drilled designs have fallen out of favor to some extent as many manufacturers and users believe that holes provide starting points for cracks in the rotor surface without offering a significant difference in performance over slots that don’t completely pierce the rotor faces. This impression wasn’t helped by the flood of cheap “drilled” rotors that came on the market that were simply some small ‘manufacturer’ taking an OEM part and throwing it on a mill to put some holes in it without any consideration for the overall strength of the rotor. You will also see debate about the advantages of a two-piece rotor assembly over one that is cast as a single component. Primarily, these claimed benefits fall into two categories; one, a rotor assembly with a separate disc is less expensive to maintain because the friction surface can be replaced independent of the mounting “hat,” and two, if the rotor is designed to “float” on the hat (which is quite typical of motorcycle applications, but less so in four-wheel vehicle designs) distortion of the rotor from expansion and contraction is reduced.

Finally, there is the question of caliper selection. Once again, there is a huge range of possibilities in terms of piston count and other features, but for most sportsman-level racers in economical classes, the biggest bang for the buck will come from an upgrade from factory “floating” calipers that have a single piston and rely on the entire housing shifting on its mounts to apply even pressure to the rotor to a design with opposed pistons. Most cars with sporting aspirations will come from the factory with opposed-piston calipers, which can benefit from an upgrade to designs that offer staggered piston size for more consistent pad wear, additional pistons to spread clamping force over a larger swept area, or calipers and matching mounting brackets that allow an upgrade in rotor size to take full advantage of the room available within larger-diameter wheels.

We’ve obviously just scratched the surface of this topic, but hopefully we’ve provided a jumping-off point for further research into competition brake upgrades. Remember - a car that won’t start is just an inconvenience, but a car that won’t stop will ruin your whole day.