What Is A Turbocharger?

State of Speed Basics - The Manly Art of Automotive Knowledge

Ah, the noble turbocharger… Is there a more hallowed, or more misunderstood piece of high-performance hardware? It is the very definition of simplicity with only a single moving part, but it’s also incredibly complex in design and engineering that requires a mastery of aerodynamics, physics, materials science, and advanced manufacturing. Of course, nothing has catalyzed more keyboard warrior bench racing conflicts, with the possible exception of “NOS.” 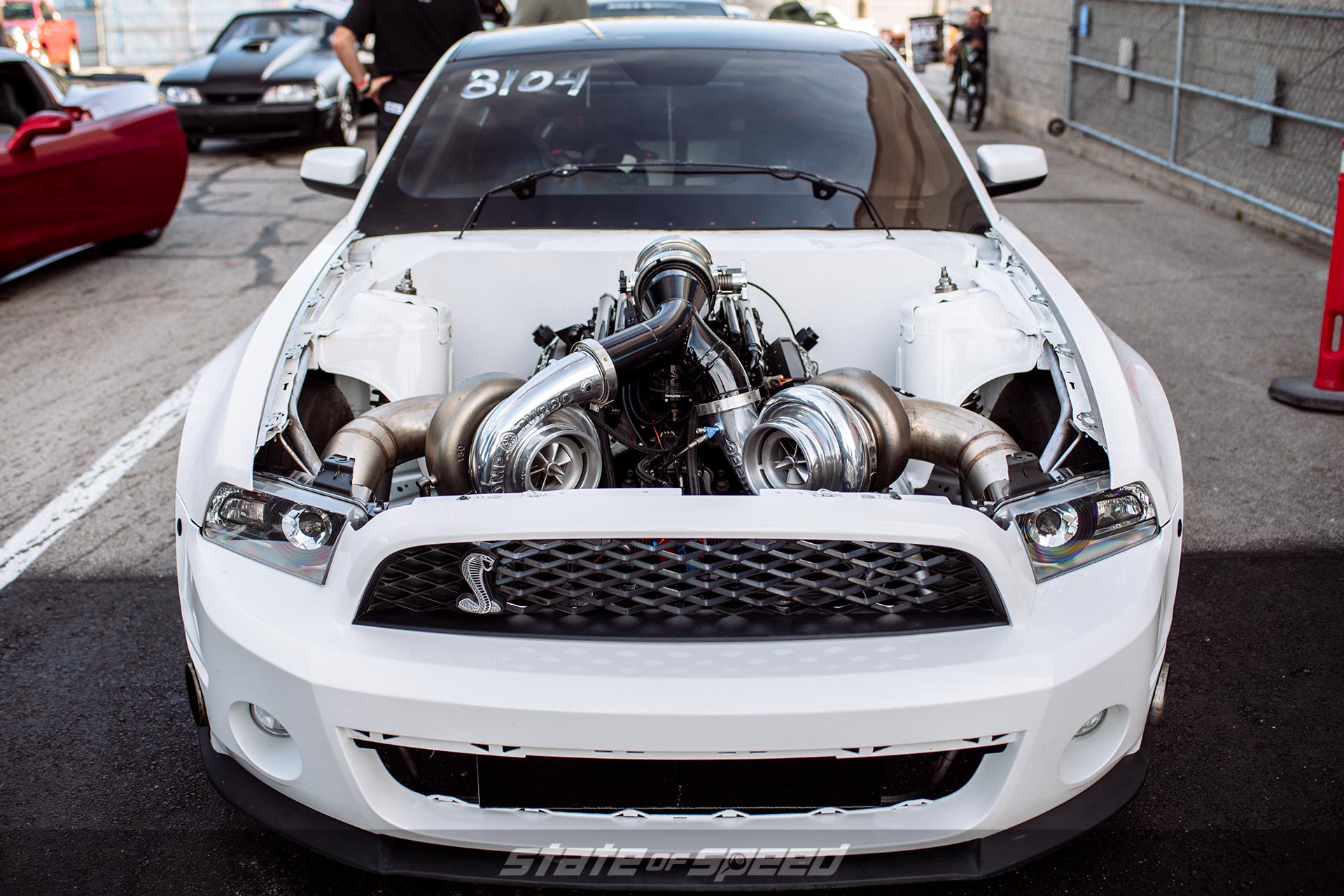 Today, we will separate fact from fiction, dispel some myths, and provide a solid education on the history, technical aspects, and practical use of turbocharging as it applies to high-performance engines. Strap in, because it might get a little bumpy. 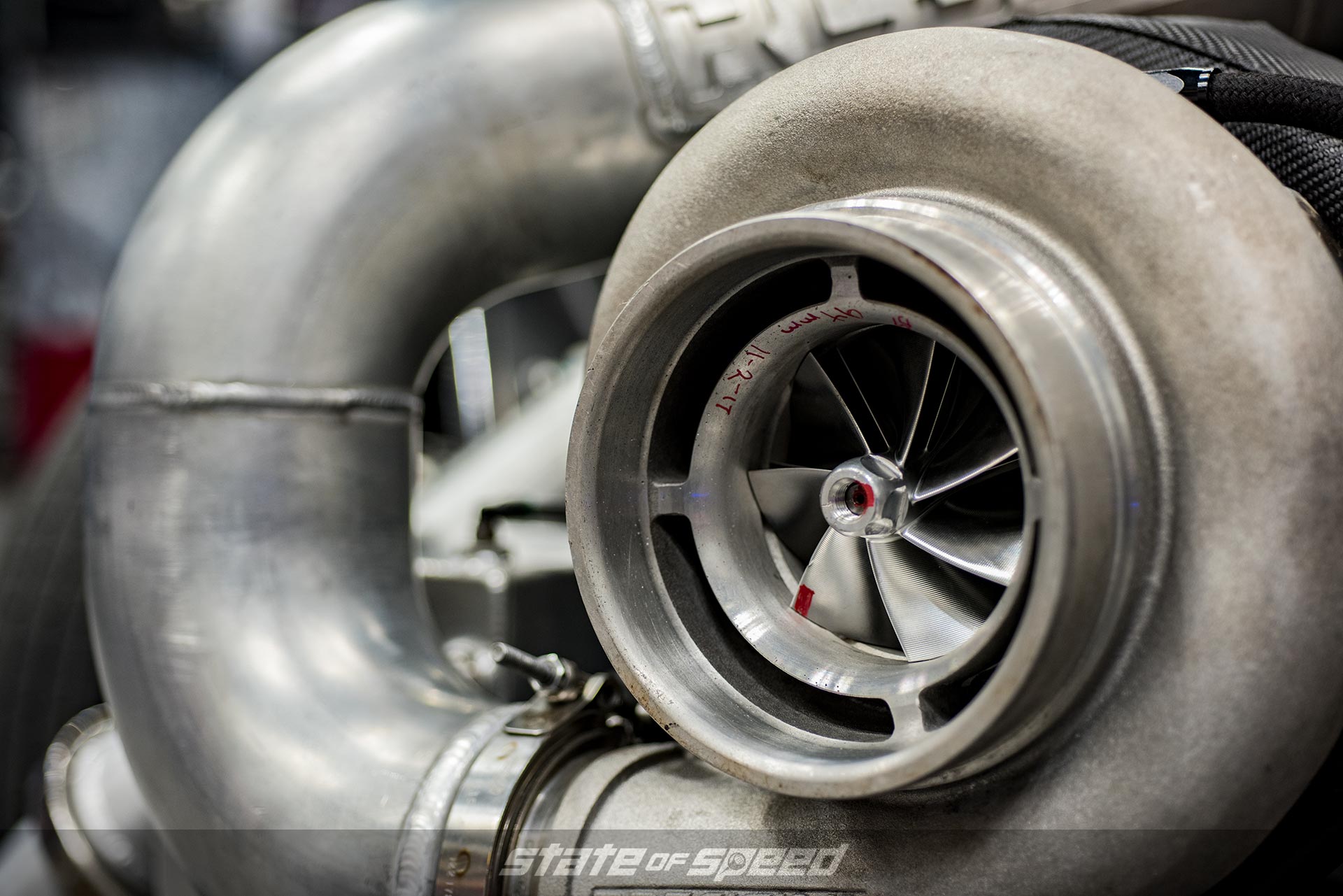 First, let’s define what a turbocharger does. When turbos were first being seriously developed during the period between the First and Second World War, they were referred to as “turbo-superchargers” which is a pretty good encapsulation of what they do. Turbos are part of the larger family of superchargers, which are defined as devices that provide air to an engine at a higher volume and pressure than the ambient atmosphere; but turbos are distinguished by the fact that they are powered by a turbine that is spun by exhaust gas, instead of a direct mechanical connection to the crankshaft. 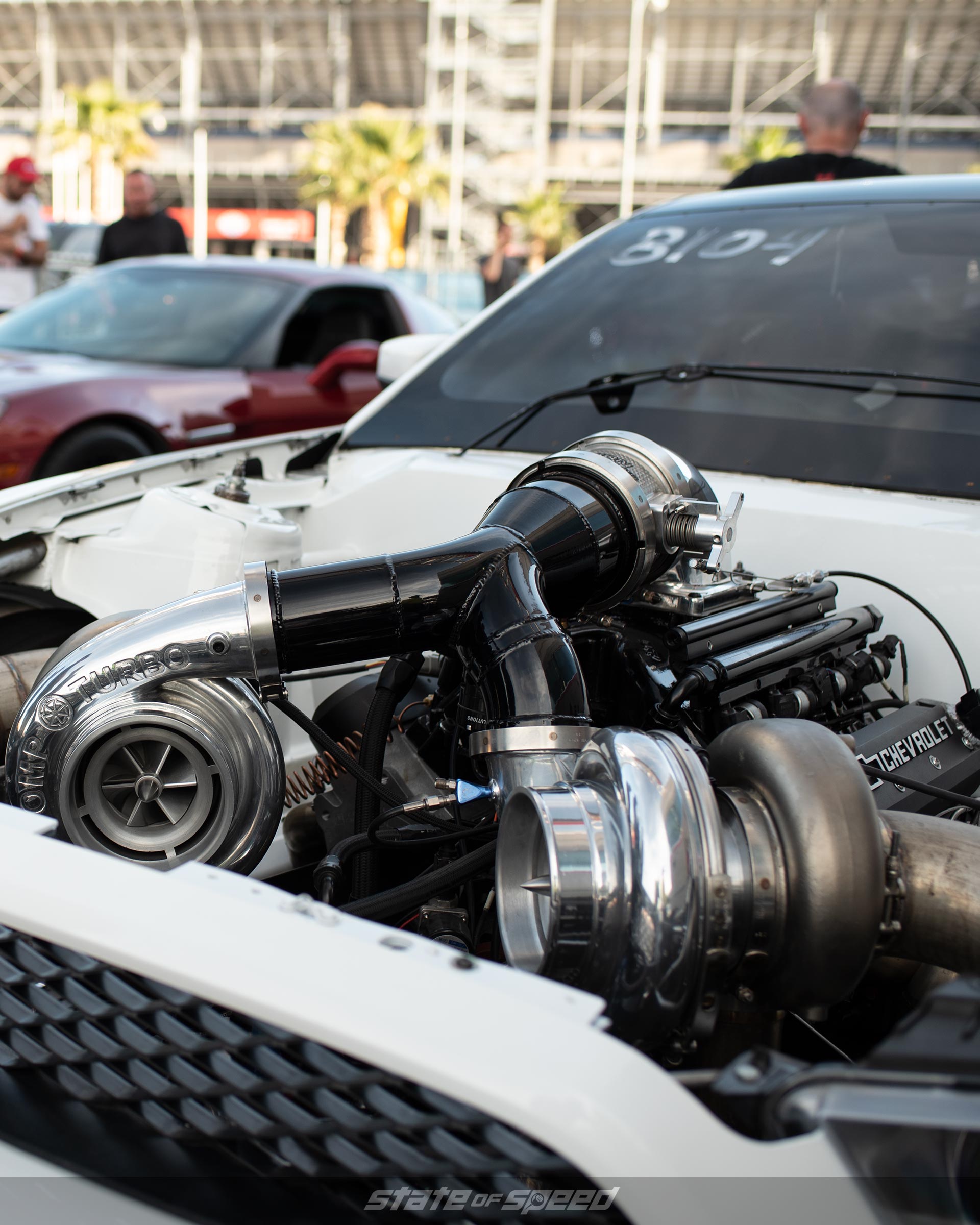 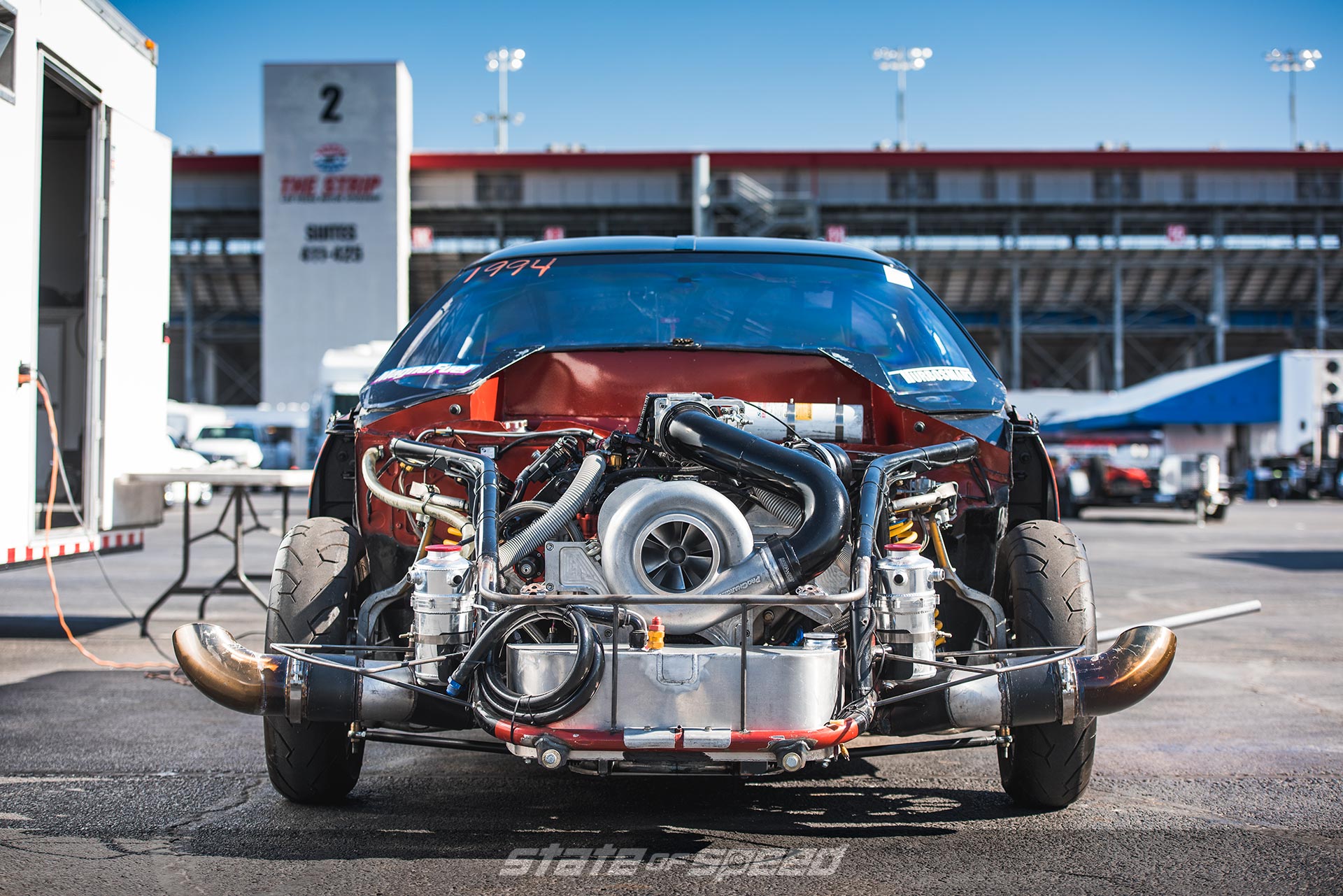 The term “volumetric efficiency” sums up the breathing ability of a particular engine, and how much it can breathe directly affects how much fuel can be burned (and ultimately turned into power at the wheels.) An engine that operates at 100% volumetric efficiency takes in every bit of air that will physically fit in its displacement in every complete intake cycle. For instance, a 2-liter, 4-stroke engine at 100% VE will swallow exactly 2 liters of ambient air for each intake/compression/combustion/exhaust cycle across all its cylinders. 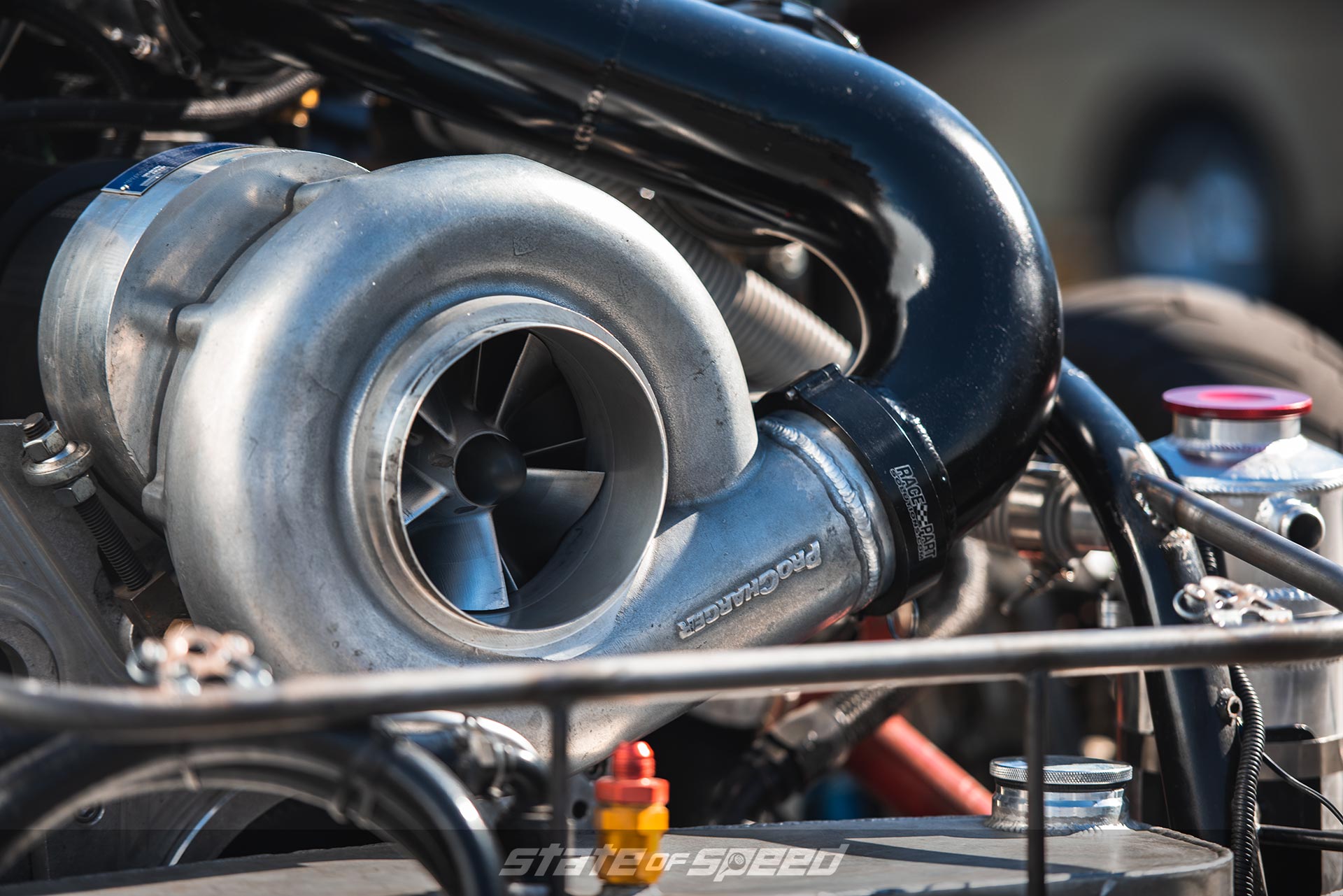 In a naturally-aspirated engine, most of the time it will be operating at less than 100% VE thanks to the inherent inefficiency of the intake tract, valvetrain, and other restrictions. It’s possible to actually get that theoretical 2-liter engine to gulp down more than 2 liters per cycle in narrow operating ranges, thanks to clever camshaft lobe profiles and tuned intake and exhaust manifold design. But even the absolute best naturally aspirated engine will be lucky to get a few extra percentage points above 100% VE—there’s only so much that can be done with atmospheric pressure pushing air into the cylinders.

This is the point where superchargers come in. Once you have a way to artificially push more air into the engine beyond what the ambient atmosphere can provide, the sky is (literally) the limit when it comes to volumetric efficiency. Superchargers (and turbo-superchargers) found their first high-performance application in aircraft engines; as altitude increases, the air available decreases, and at high altitude, naturally-aspirated engines can only produce a small fraction of the power they do at sea level.

Initial experiments centered around using supercharging to “normalize” available power and keep it constant as an airplane gained altitude, since engine output was acceptable at ground level, and the designs of the day weren’t able to cope with high boost and extreme dynamic compression. That would change in World War II as improved metallurgy, better engine designs, and high octane fuel all came together to allow more and more boost over a wider range of conditions without damaging the powerplant.

Once you have a way to artificially push more air into the engine beyond what the ambient atmosphere can provide, the sky is (literally) the limit when it comes to volumetric efficiency.

While many aircraft engines employed superchargers that were mechanically driven off of the crankshaft (often with multiple compressor stages and two-speed transmissions), other designs employed turbo-superchargers that were driven by the pressure of exhaust gas. The advantages of a turbo over a mechanical supercharger were numerous; they didn’t need to be directly coupled to the engine (in fact, the turbocharger in the Republic P-47 fighter was a full thirty feet behind the engine, tucked away aft of the pilot in the rear fuselage).

It was easy to control boost with a wastegate instead of a complex mechanical transmission (more on that in a moment), and best of all, instead of taking power away from the crankshaft to spin the compressor, a turbine provided that power for “free” by using the energy of the exhaust gas instead.   While they made an appearance on cars in the inter-war years, in the post-war period saw both mechanical superchargers and turbo-superchargers gain in popularity with factory applications and hot rodders of all stripes—the appreciation of the power of boost had become mainstream, and there was no turning back.

How a Turbocharger Works

Part of the subtle beauty of the turbocharger is how simple it is, mechanically speaking. At its core, a turbo is simply a turbine wheel, a compressor wheel, and a shaft that connects the two. On the “hot” side of the turbo, an exhaust manifold sends spent gasses into the turbine housing and to the outside of the vanes of a turbine wheel, causing it to spin. The shaft transmits that rotation to the “cold” side of the turbo, where the compressor wheel ingests air in the center, then slings it out around the diameter of the wheel into the compressor housing. 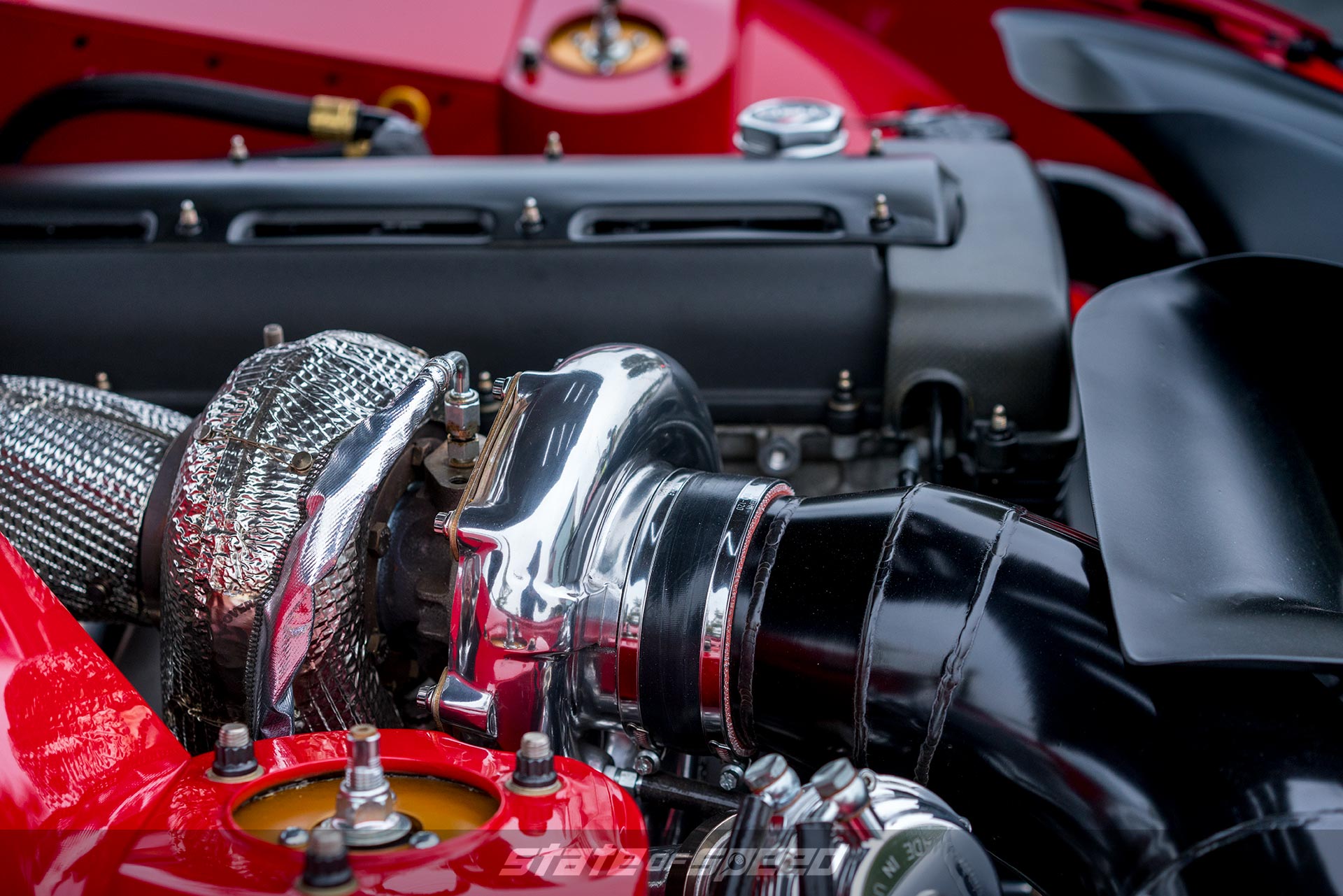 Automotive turbochargers almost exclusively use this sort of ‘centrifugal compressor’ to produce boost—rather than moving air like a desk fan, it works more like a playground merry-go-round, using the small but still significant mass of the air itself to create increased pressure as it is forced from the center of the wheel to the edge, where it is collected by the compressor housing and sent on to the engine. 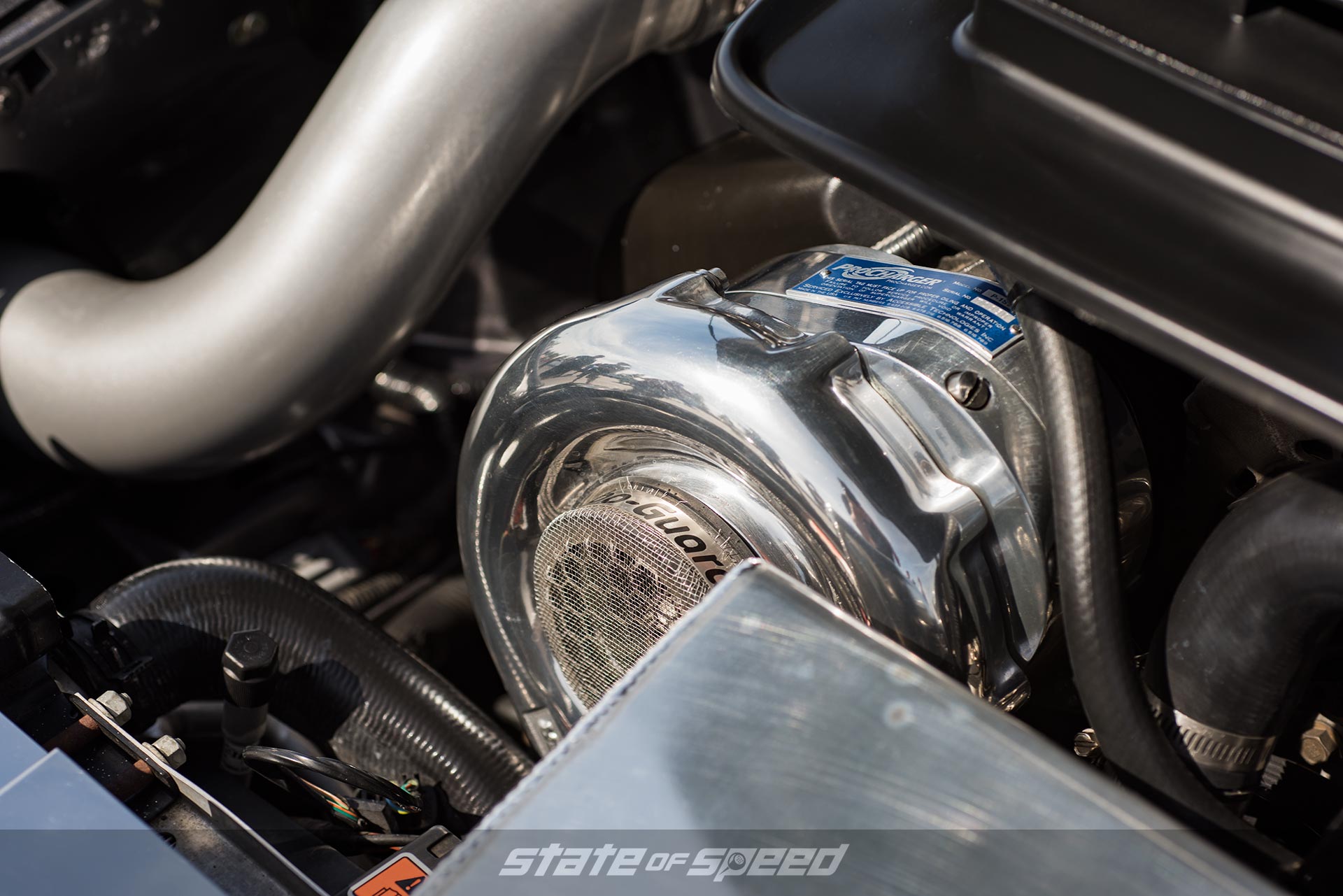 Though they look the same at first glance, a quick peek behind the compressor housing will tell you if it’s being powered by the crank, or by exhaust gas.   As was mentioned before, one of the advantages of a turbocharger is that it doesn’t place any parasitic drag on the crankshaft in order to produce boost. The energy required to spin the compressor comes entirely from the flow of exhaust gasses, effectively recovering power that would otherwise be lost.

In order to control boost and keep it at the desired level, a device called a wastegate is used on the “hot” side of the system, ahead of the turbine wheel. Using a combination of spring pressure and a pneumatic actuator, the wastegate is a valve that can open to allow some of the exhaust flow to bypass the turbine to regulate how fast it spins the compressor on the “cold” side of the turbocharger. 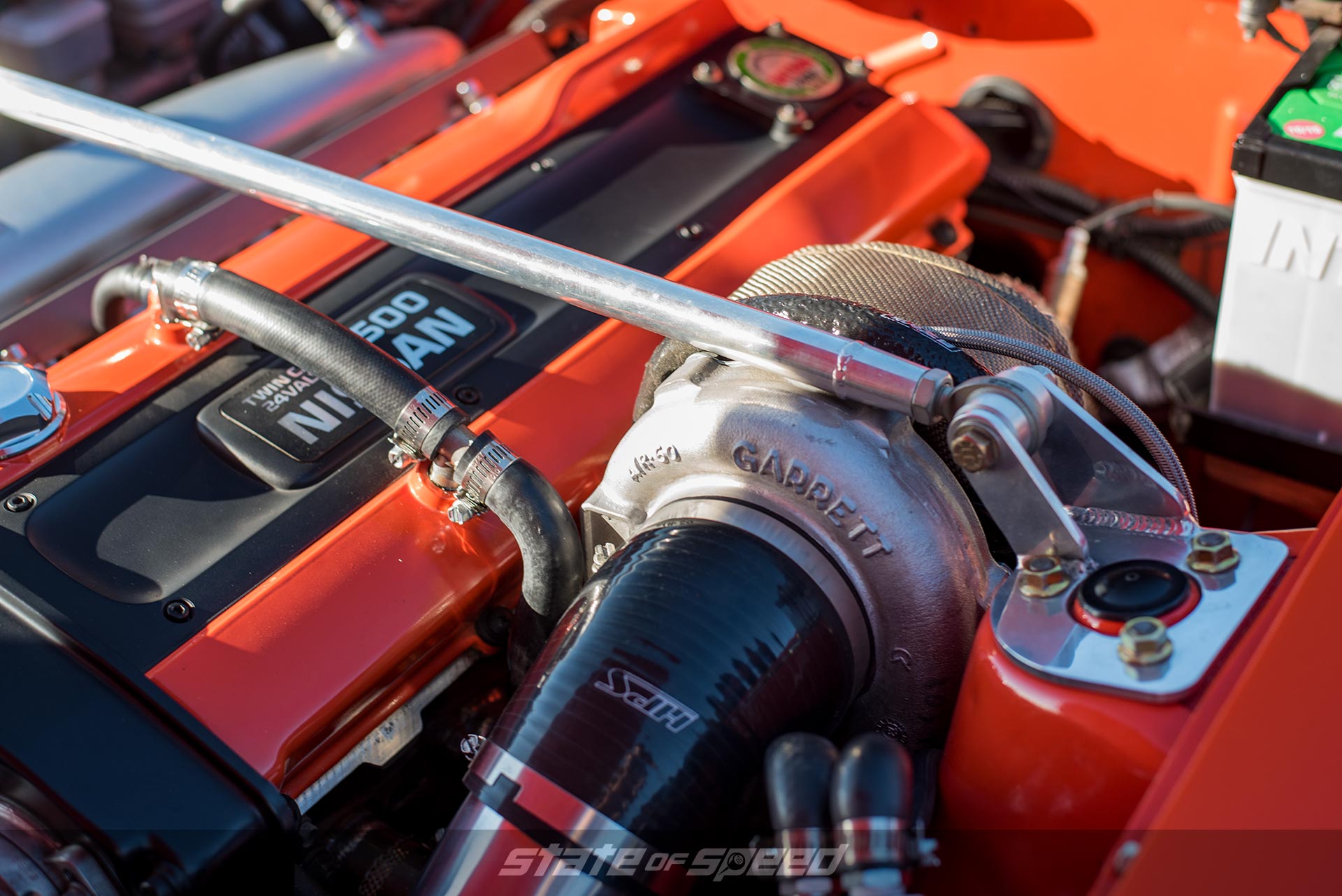 In factory turbo applications, the wastegate is often built into the turbine housing inlet as an “integral” design and uses a regulated pressure source connected through a computer-controlled solenoid valve to the intake manifold to open or close itself, based on how much boost the engine management system is requesting at that moment. Turbocharger systems for racing or aftermarket systems for street use often use a separate stand-alone wastegate to allow more precise control or to provide a greater bypass capacity than an integral wastegate.

On the “cold” side, you’ll often find a device that looks very similar to a wastegate, but that performs a very different function. Whether it’s called a “blow-off valve” or a “compressor relief valve,” it’s not there to regulate boost. This component provides another vital function—because air has mass and inertia, and so does the spinning compressor wheel, whenever there is a rapid change in throttle position there will be a sudden surge in pressure inside the intake tract. A good example is during an upshift when the throttle is momentarily closed between gears. Air that has been rushing toward the throttle body suddenly meets a restriction, and a pressure wave bounces off of it and is reflected back towards the turbo. This wave tries to slow the rotation of the compressor since it’s moving in the wrong direction, and if it’s strong enough, it can damage the shaft or even cause it to snap. 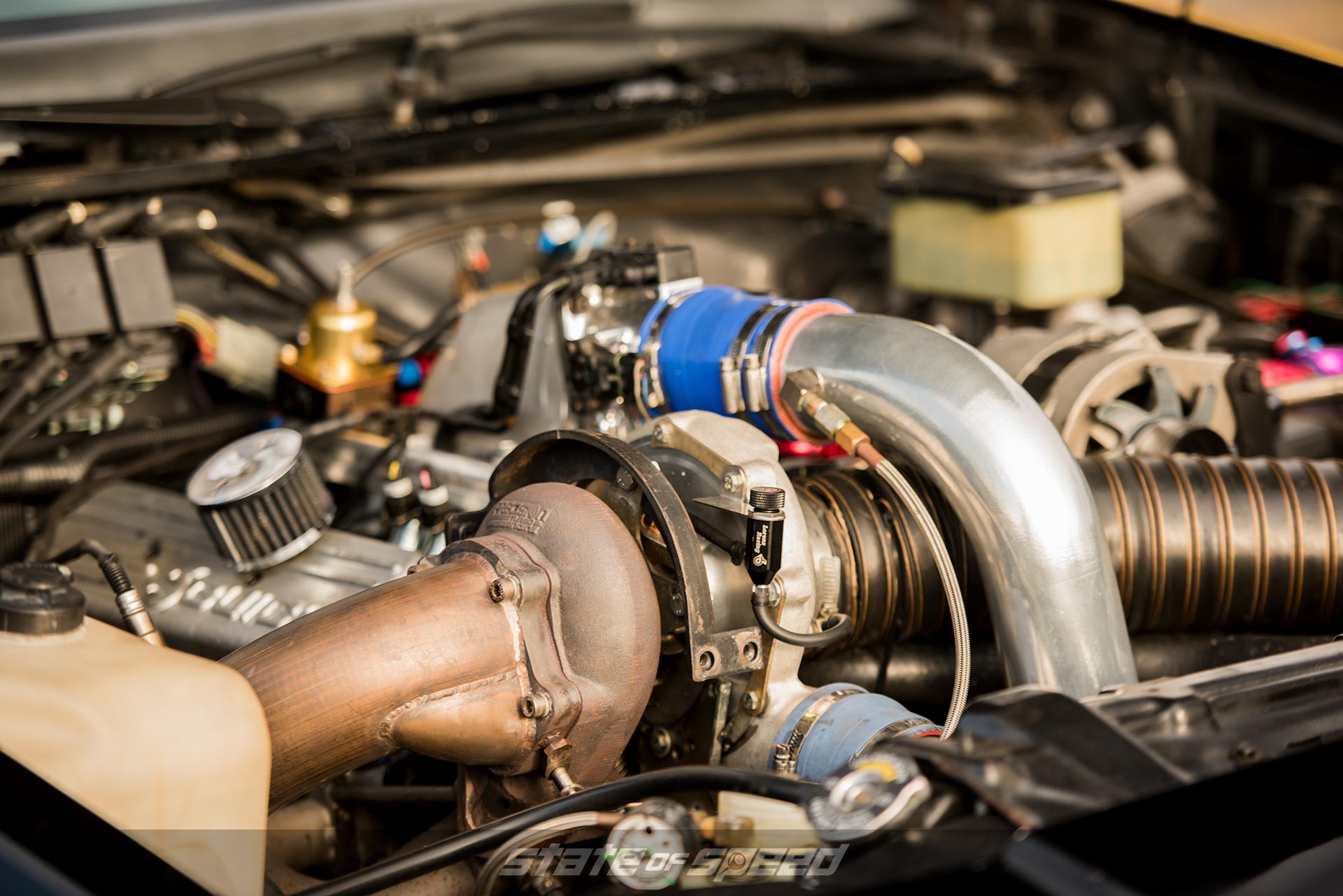 A compressor relief valve uses an actuator that compares the pressure in the intake tract between the turbo and the throttle body against the pressure inside the intake manifold on the far side of the throttle blade, and when there’s a significant difference (indicating that the throttle is shut), it opens to release the trapped pressure and prevent compressor surge. If the valve is open to the atmosphere, this is the source of the characteristic “Psssh” sound so many tuner cars produce, but most factory turbo setups will quietly recirculate this air via plumbing that sends the pressure around the turbo and back to the inlet. 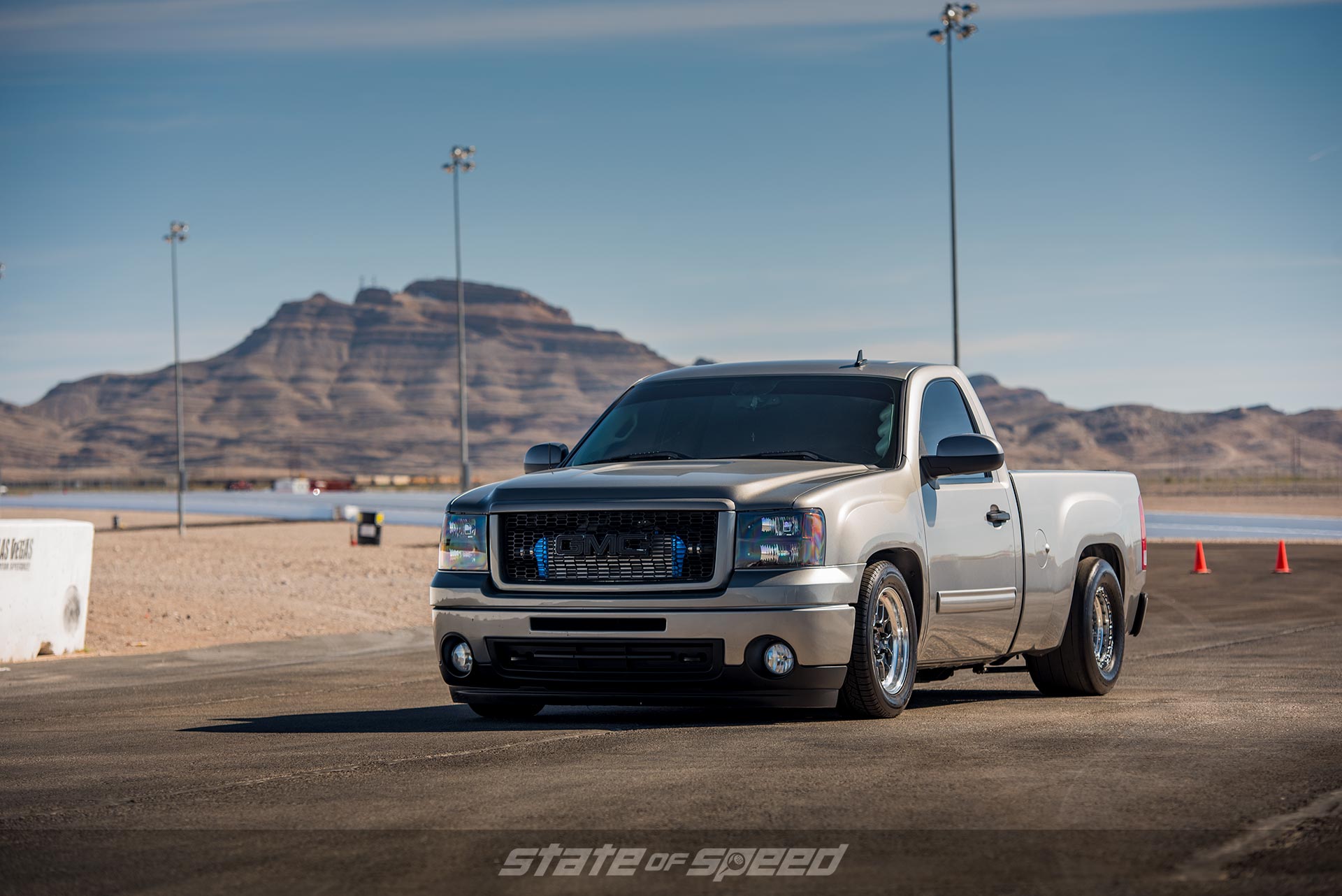 At its most basic, a turbocharger setup just contains the key components listed above—a turbocharger unit itself that contains a turbine and compressor linked by a shaft, a wastegate to regulate boost and prevent the pressure on the intake side from exceeding desired levels, and perhaps a compressor relief valve to help keep the turbo spooled between gears and reduce surge loads. Like anything else related to high performance, though, things can get as complicated as you can possibly imagine.

Starting with the center section of the turbocharger, the shaft, which turns at tens of thousands of RPM at full-tilt, needs to be supported by a bearing to let it spin with as little friction as possible. Most turbochargers use a plain bearing, which works like the main and rod bearings on the crankshaft, using oil pressure to provide a cushion. A step up from there in sophistication are ball-bearing center sections, which don’t require the same high volume of oil to do the job as a plain bearing and offer less friction (and a little advantage in how quickly the turbo spools up). Ceramic ball-bearing center sections offer lighter rotating components and even less friction, with a commensurate increase in price. 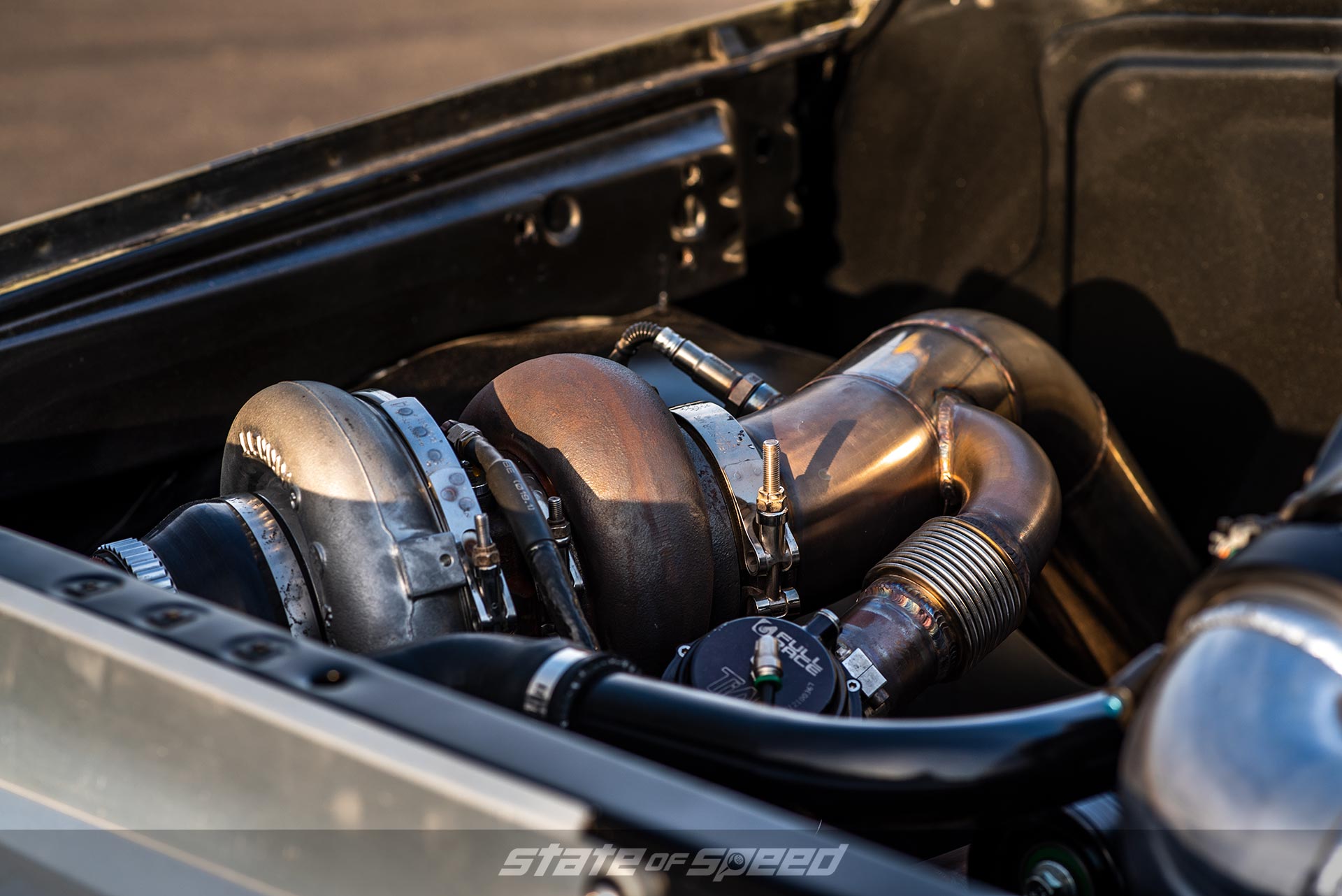 Finally, turbocharger center sections are often water-cooled via a connection to the engine’s coolant system in order to thwart heat from making its way from the “hot” to the “cold” side and to prevent extreme temperatures from turning the lubricating oil into carbon deposits inside the bearings. 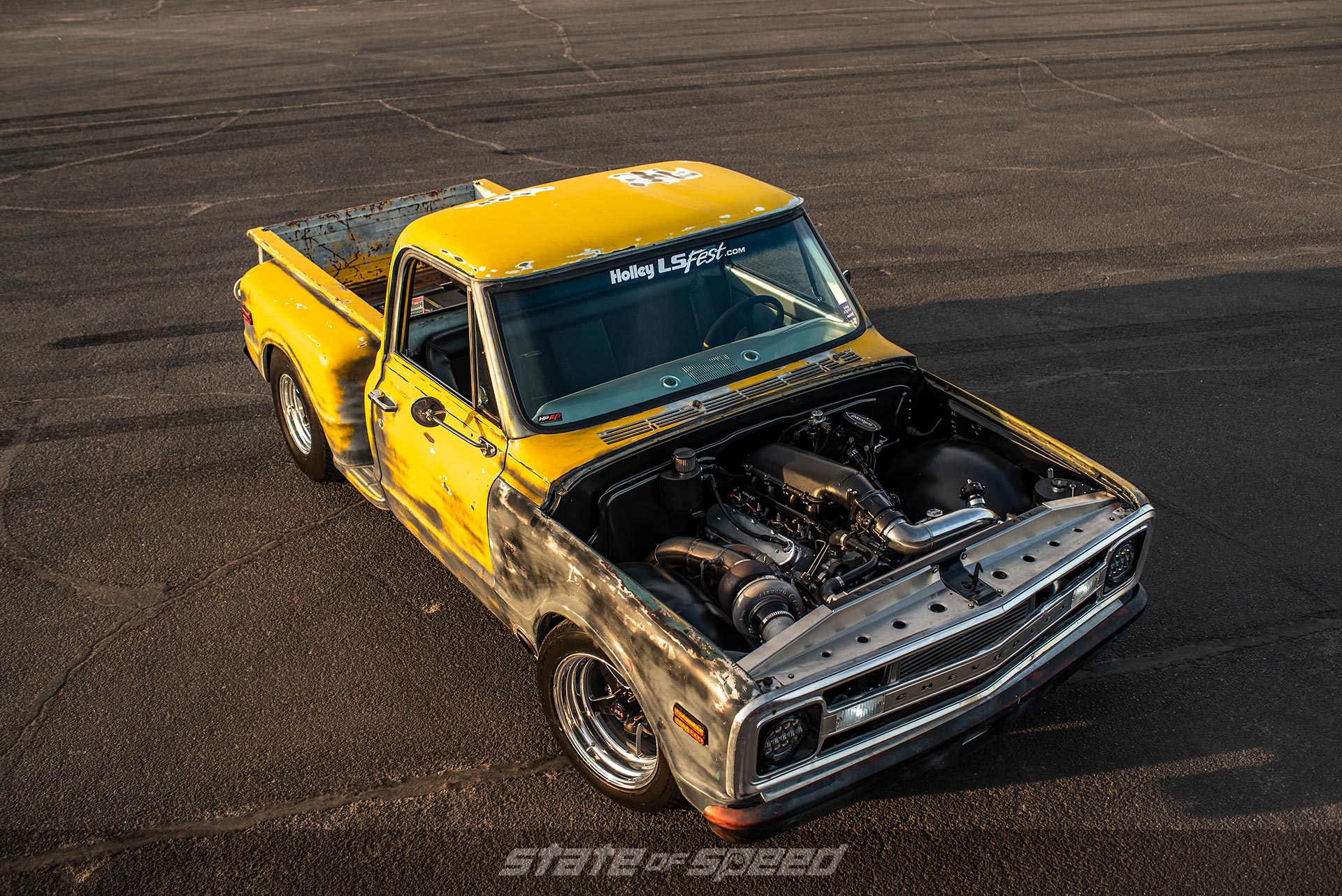 The size of the turbocharger has a big impact on engine performance; the larger in diameter the components are, the more airflow they can provide (and the more horsepower they can support), but this comes at the expense of slower response to changes in throttle position because of the increased inertia of the rotating assembly. Large single turbochargers are popular for drag racing where lag isn’t an issue, but for other forms of racing or street applications, twin turbo setups are popular, especially for V-type engines where each cylinder bank can have its own turbo. Some factory twin-turbo systems (I’m looking at you, MKIV Supra!) used two different sized sequential turbos, with the smaller unit providing boost at low load/RPM and transitioning to the larger one under full-boogie demand. 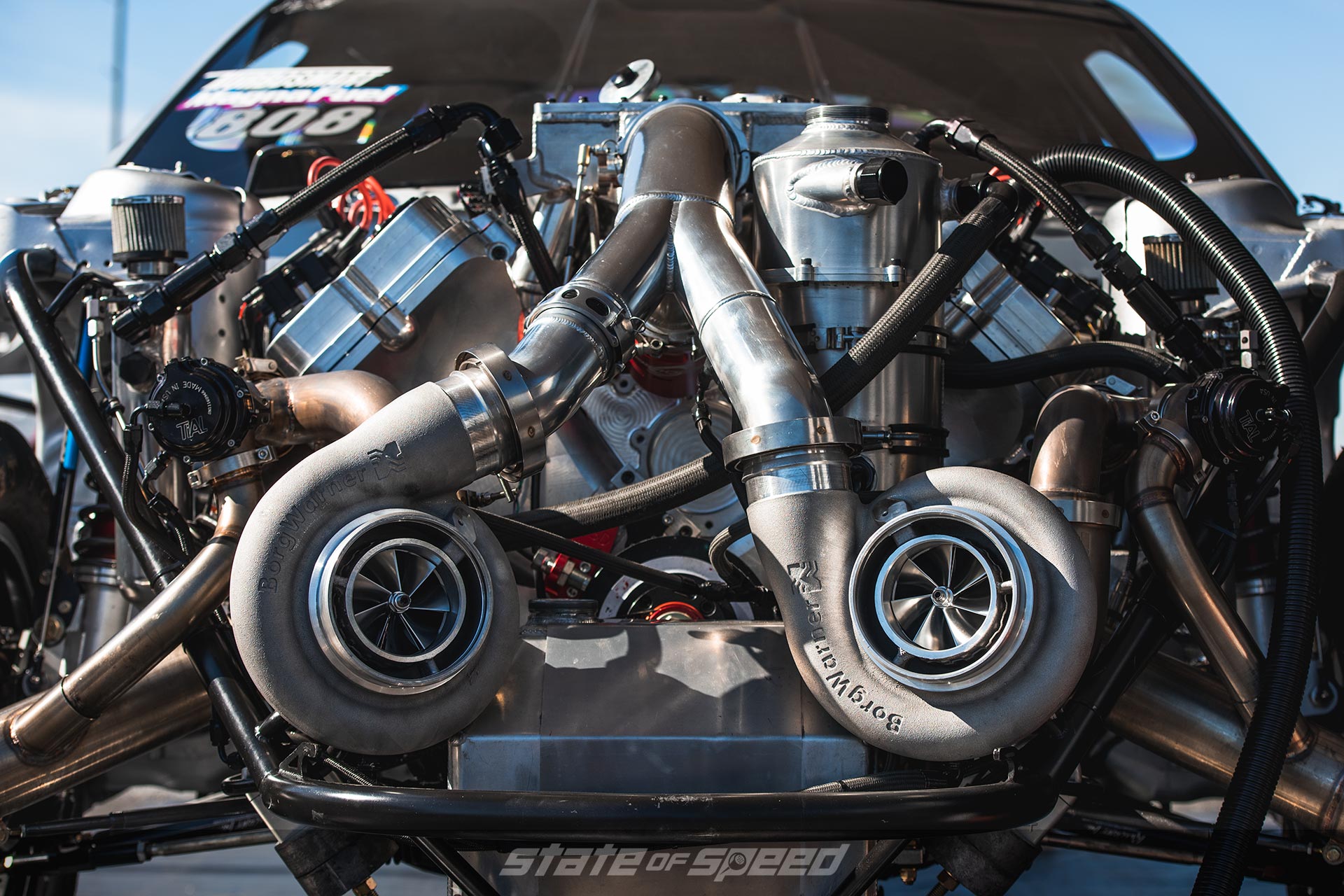 While we’ve looked at the basics of turbocharging, In the space we have available here, it’s impossible to cover all the important technical aspects of turbo system design and operation, and we’ve intentionally left out subjects like compressor housing A/R ratios, how to read a compressor map, the effect of intercooling, water injection, and cool-burning fuels like methanol, and dozens of others. Nevertheless, we’ve laid a foundation for further study, should you be interested in learning more. Remember, nobody is born knowing all this, and the only dumb question is the one that you never ask.