As the trend for hot rodding muscle cars of all shapes and sizes continues to grow the desire and sometimes need to be different grows with it. However, as hot rod guru Pete Chapouris once said, “It’s not about being different. It’s about doing the right stuff in a different way. More is not always better, less is usually more.” 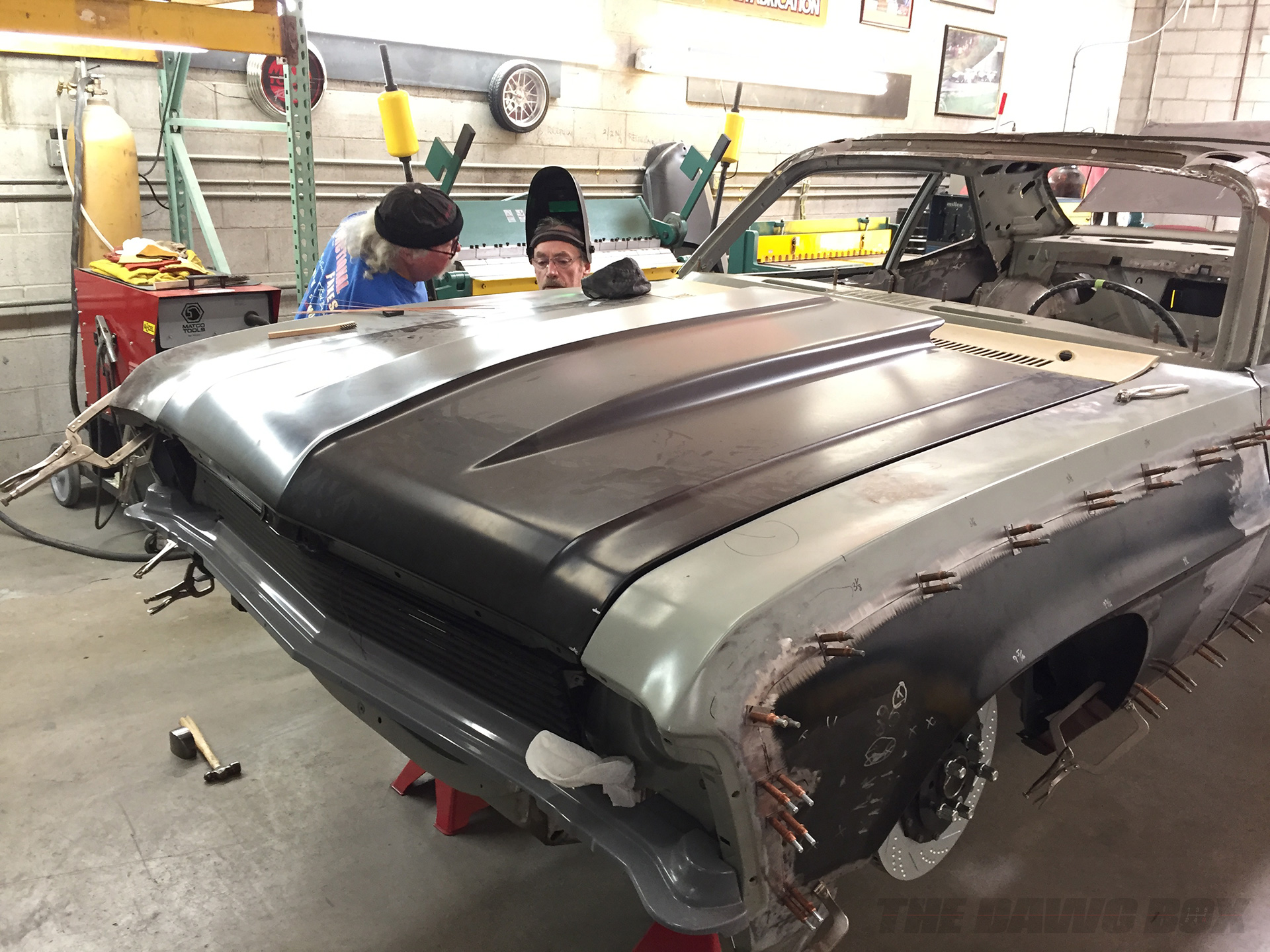 The exception that proves the ‘less is more’ rule is this new ’69 “Novaro” from the talented teams at Steve Strope’s Pure Vision Design, Mick’s Paint and Joey Angelo. In typical fashion, Strope had the vision to combine the aesthetics of a ’69 Chevy Nova and the four fenders of a ’69 Camaro—the ones with the speed flashes coming off the top of the fender lips. It’s a unique idea that nobody else conceived. 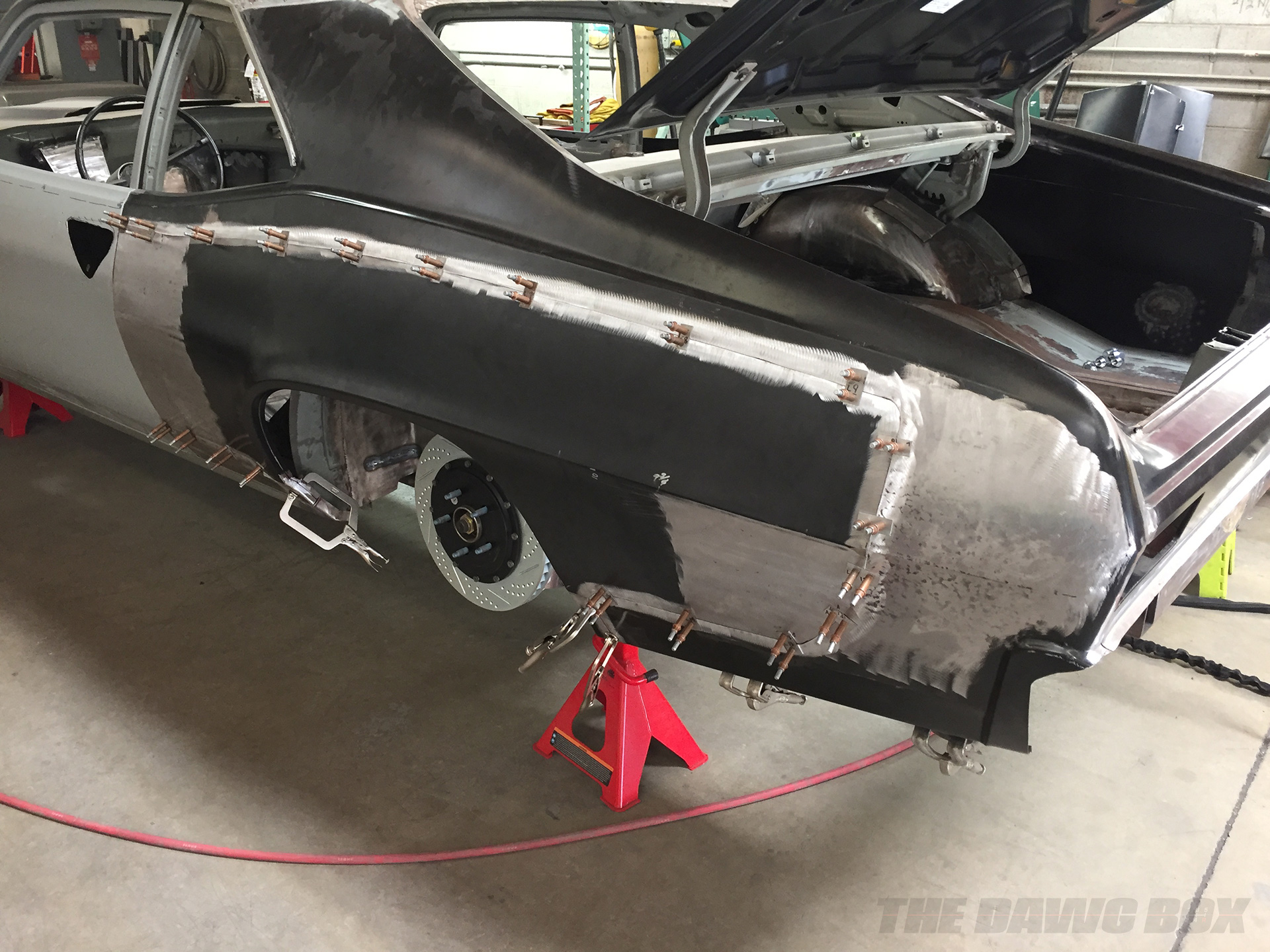 To execute the work Strope turned to Mick Jenkins at Mick’s Paint, Pomona, CA, and ace metal shaper Joey Angelo. Joey’s work was well known as he worked his magic on Bob Florine’s ’57 Ford Del Rio Ranch Wagon that was another Pure Vision/Mick’s Paint collaboration. Incidentally, the wagon was voted Street Rod of the Year by Street Rodder magazine. 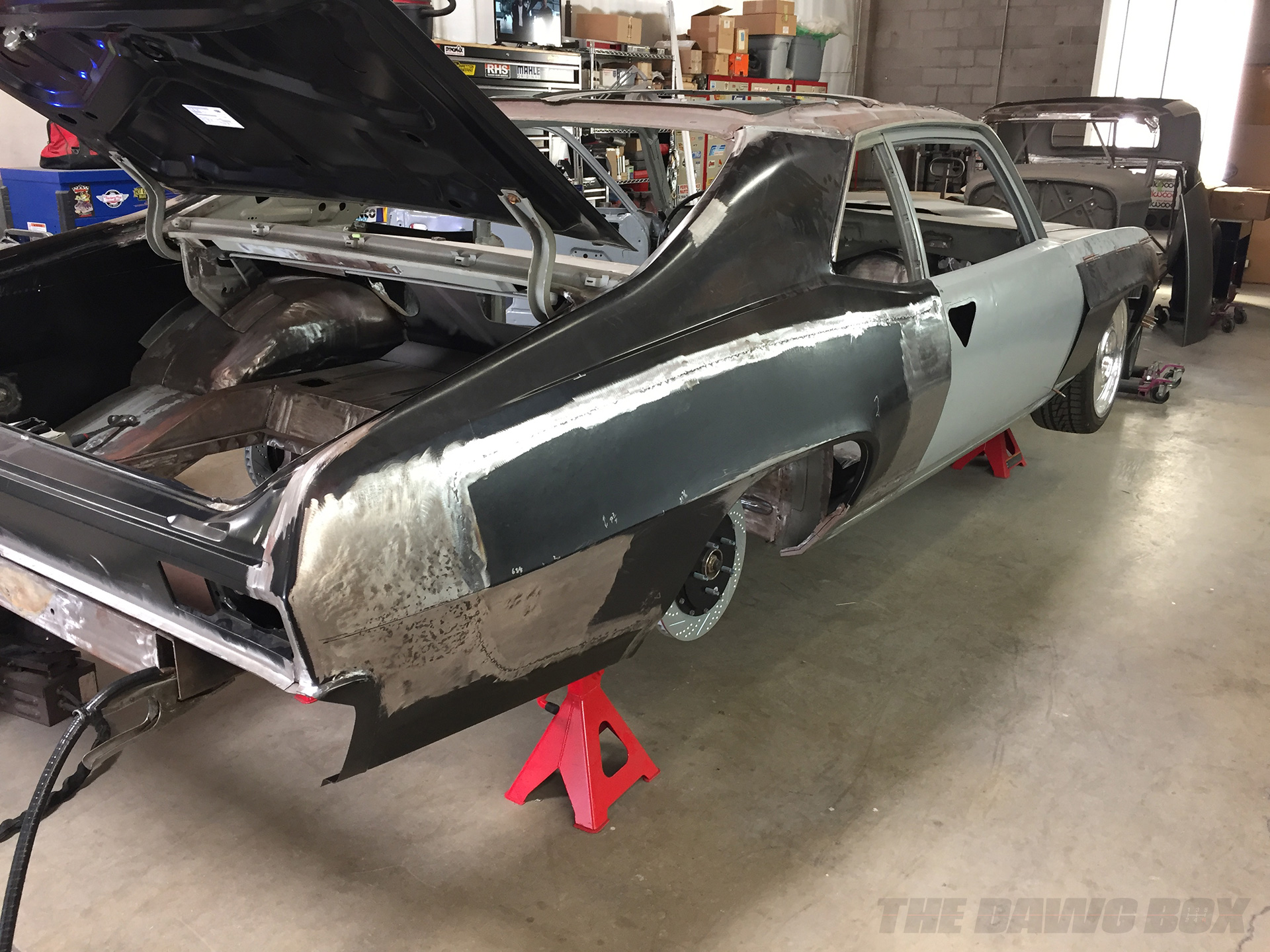 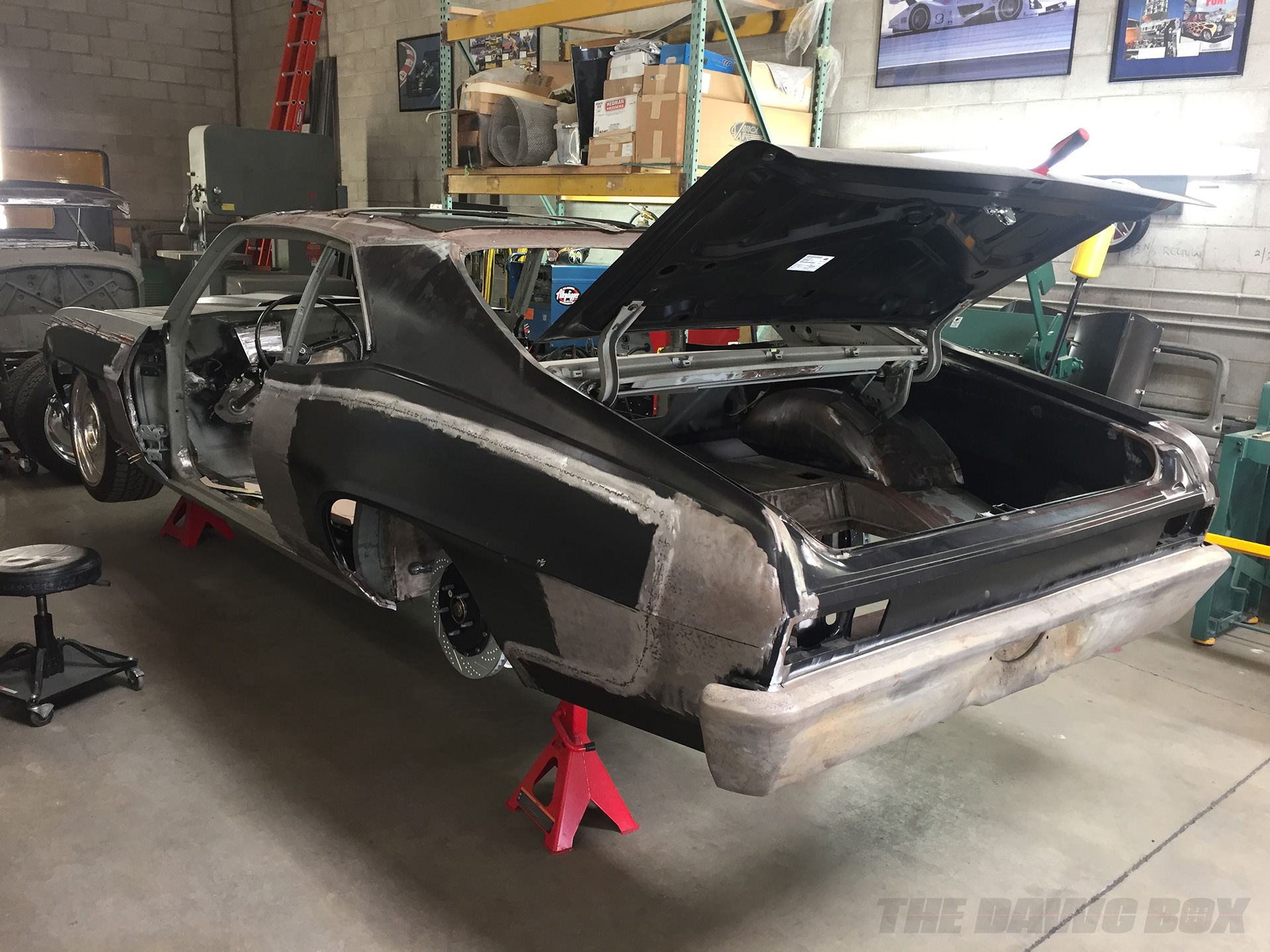 In the case of the Novaro being built for comedian Joe Rogan, Strope’s vision was to adapt the distinctive ’69 Camaro fenders onto the iconic shape of the same year Nova. Easy peasy, right? Not so fast. The Nova is kinda slab-sided whereas the Camaro is actually quite bulbous through the sides. Sure, the Camaro fenders lay onto of the Nova but the side profiles of each car are very different and making ends meet was not simple. Likewise not simple was reshaping the doorjambs front and rear. 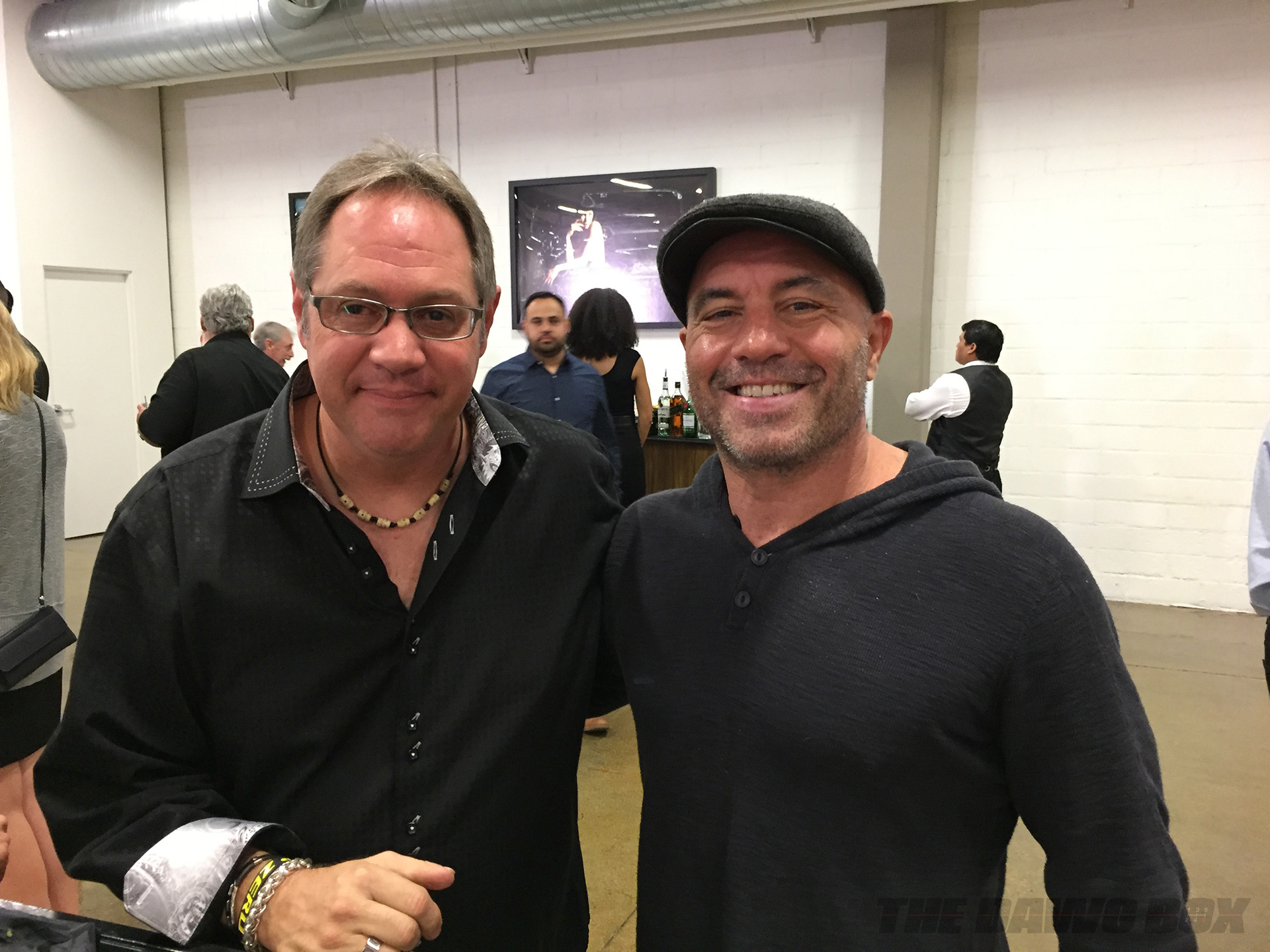 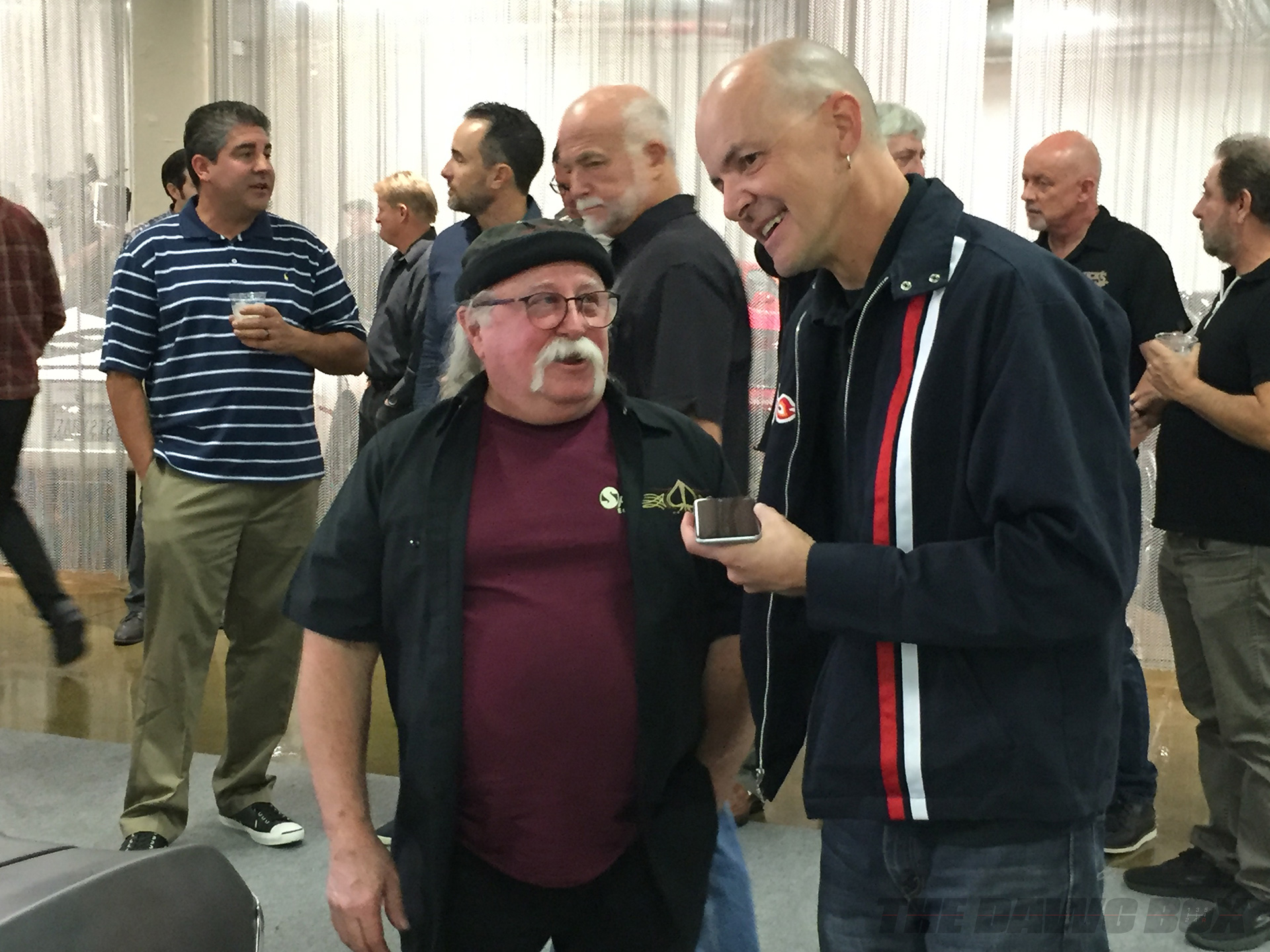 Being able to see and understand how metal is formed and how it can be massaged and shaped is an art and Joey nailed in less than three months saying, “It was not easy. The Nova needed some restoration before we could even begin the modifications and its sheet metal is original, old and somewhat thicker at 19 gauge compared to the new 21 gauge Dynacorn fenders. Trickiest part was the front of the fenders where I had to blend the curved Camaro panels into the flatter Nova fenders. Also, the front jambs were very complicated to shape. All told, there was almost 200 feet of welding, hammering, picking and filing.” 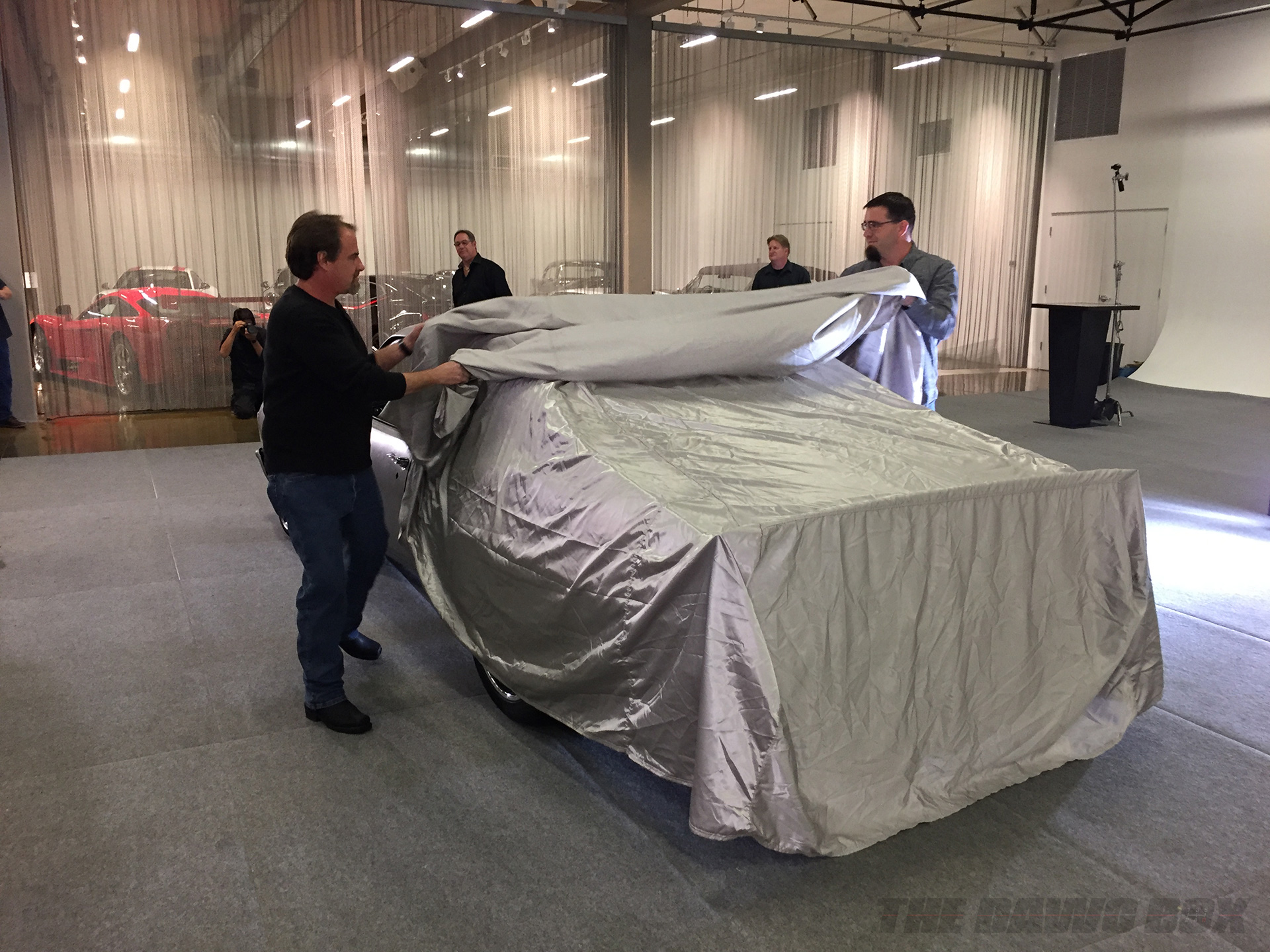 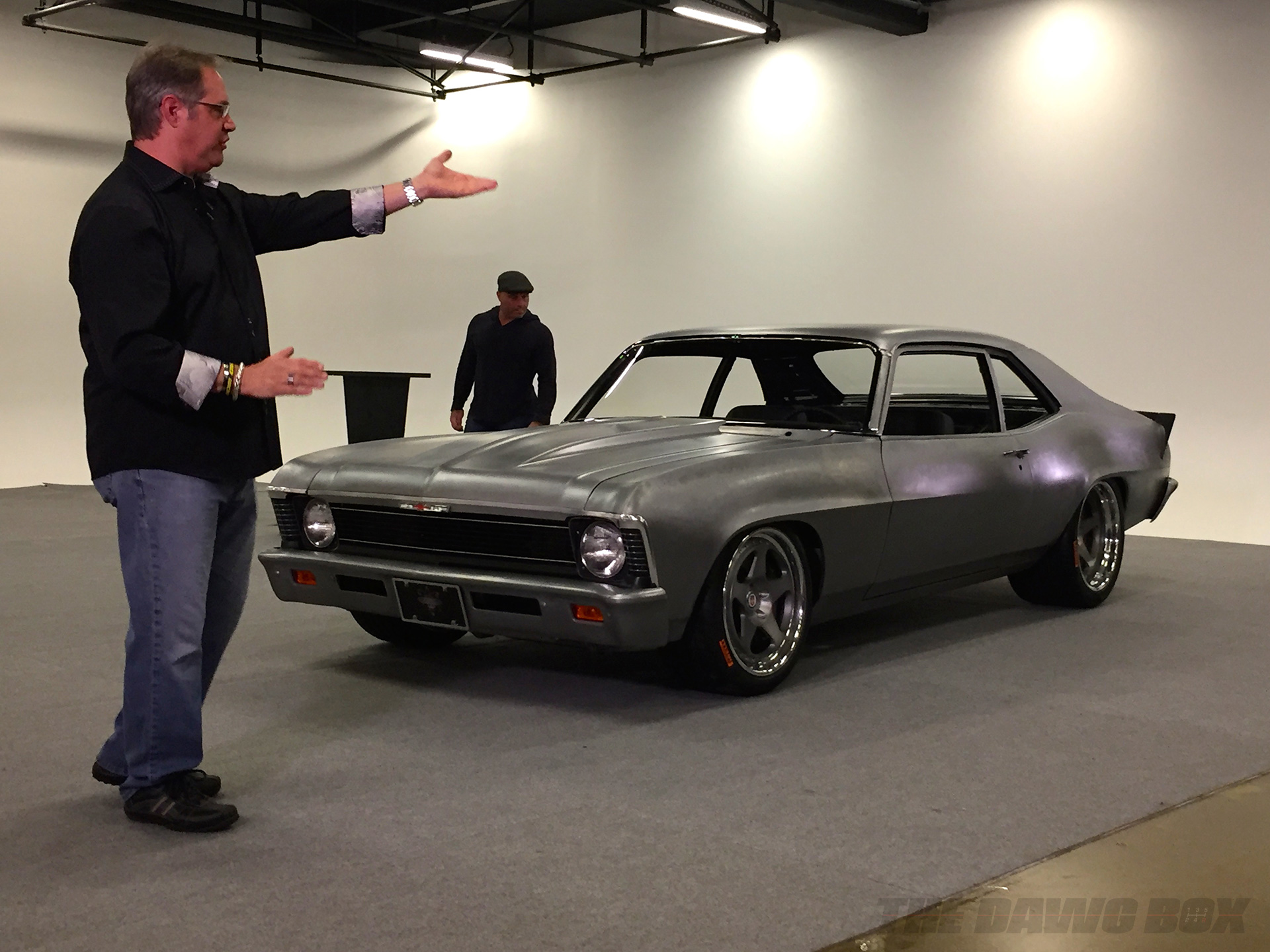 The result of Joey’s labors and those of his sometime assistant Paul Carroll were unveiled in a private ‘reveal’ in an exclusive garage in Van Nuys, California. The event coincided with the debut of Strope’s new TV show called Hand Built Hot Rods showing on the MotorTrend Channel. Luckily, stateofspeed.com was on the VIP list and we got to see Rogan literally speechless when the cover was pulled back and the car that he had never seen before was revealed. It was like handing over a baby to a first-time father. 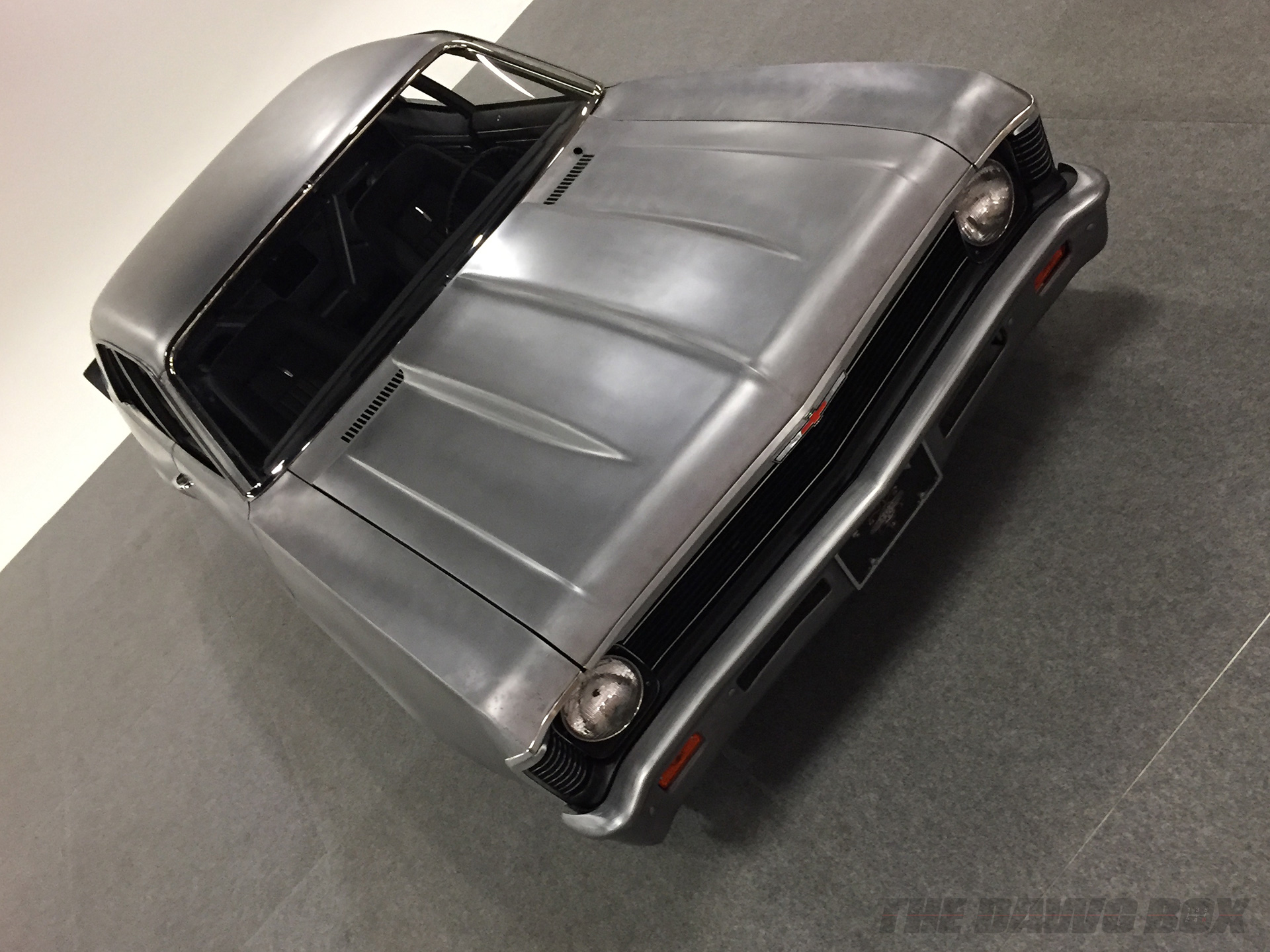 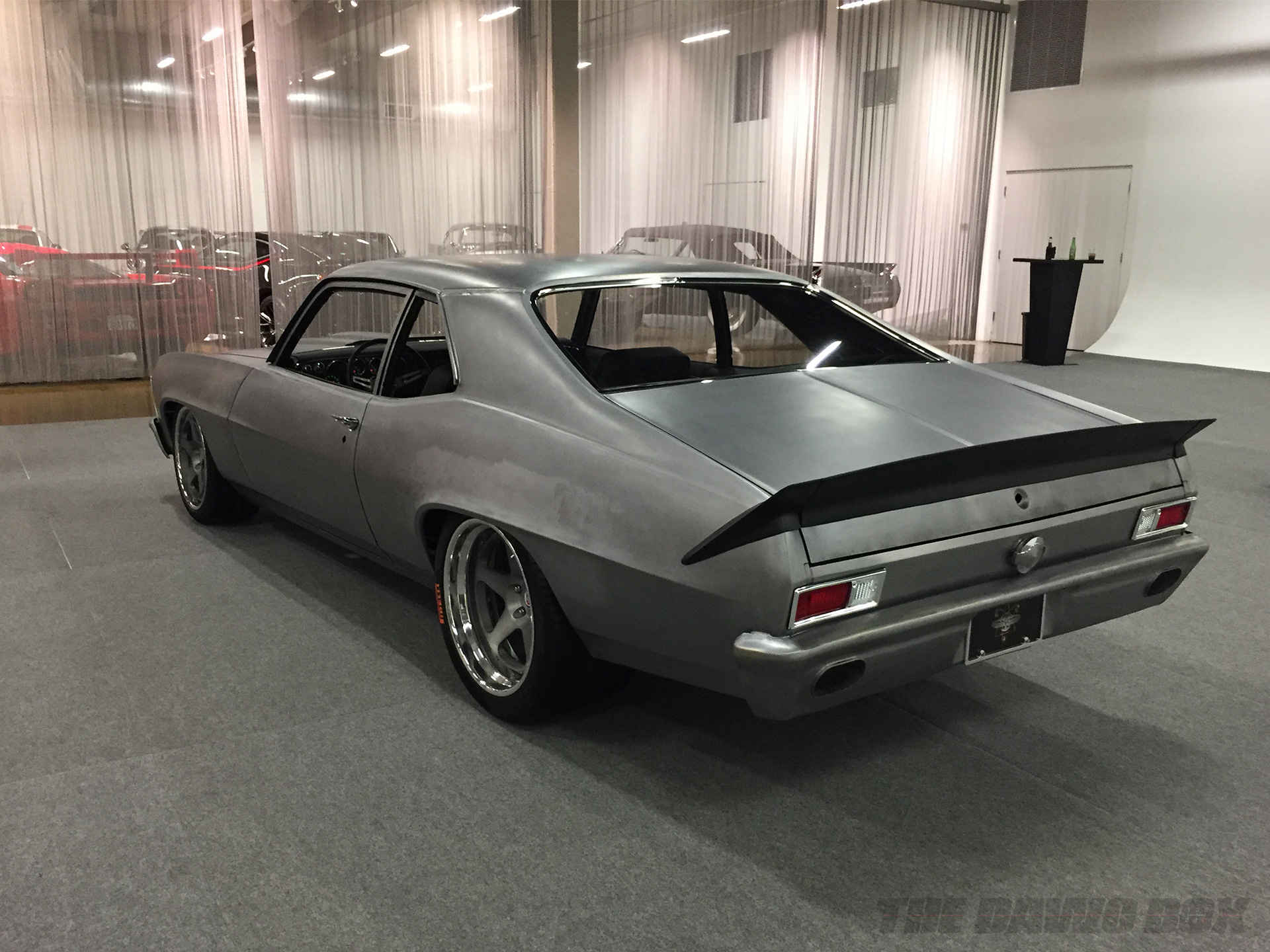 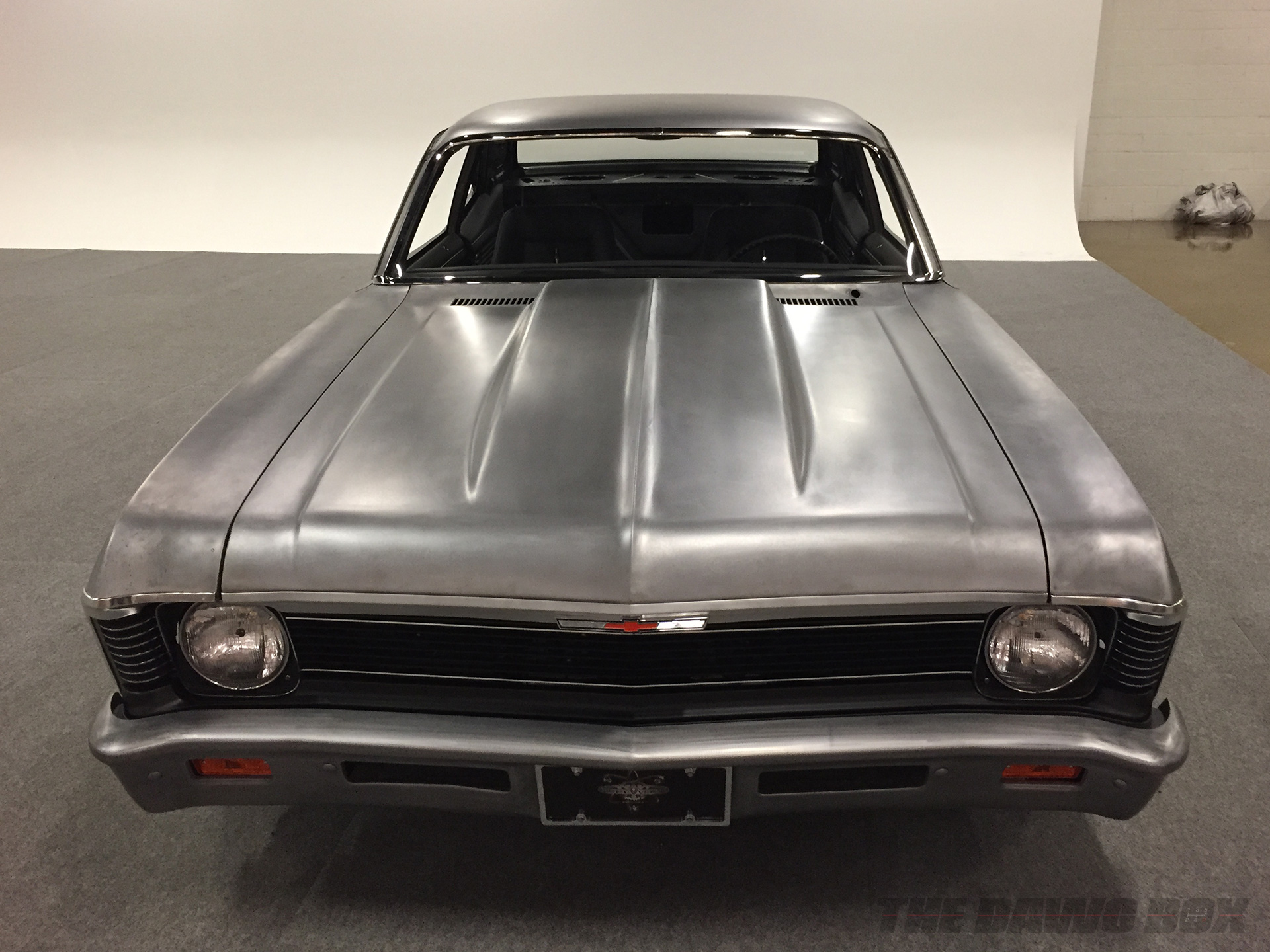 Obviously, there’s still a lot of work to do to finish the build. It will go back to Pure Vision Design in Simi Valley for mechanical working including the installation of a blown-Corvette LT4 engine. Then it will go to Mick’s Paint for final body and paintwork. Expect to see it finished sometime this year.